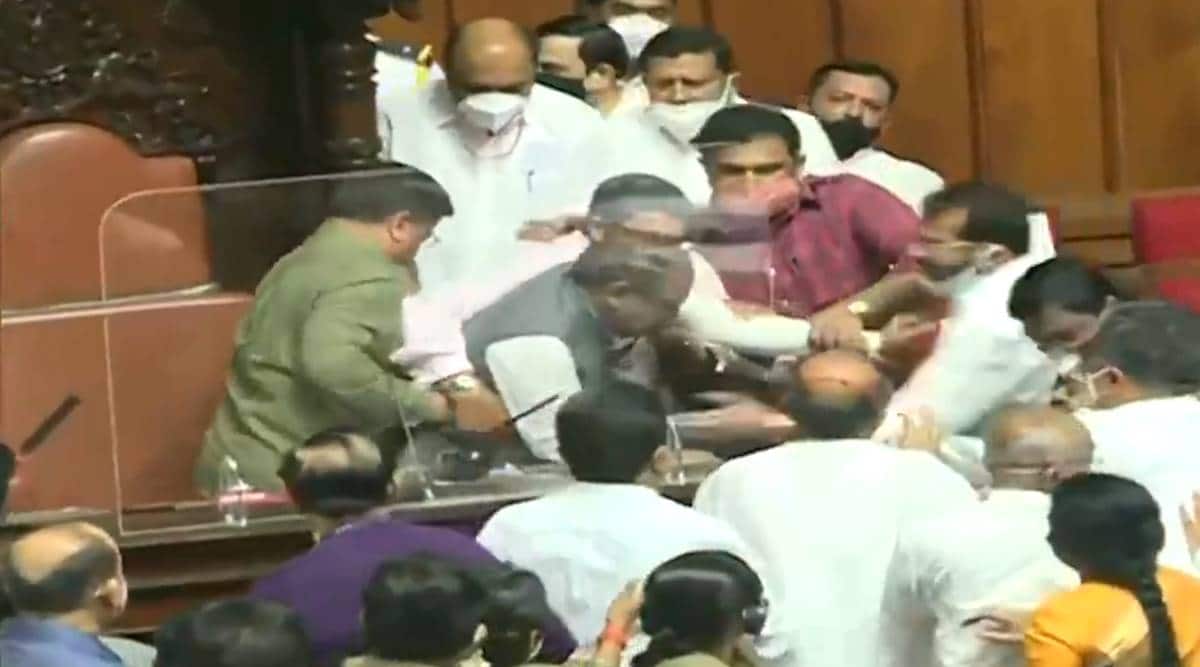 The chairman, meanwhile, adjourned the session after all legislators left the house. (Screengrab)

Chaos erupted in the Karnataka Legislative Council on Tuesday, and lawmakers who objected to Deputy Speaker SL Dharmegowda in the presidency traded with him. The council has now been adjourned indefinitely.

When the council met on Tuesday, the deputy chairman of Janata Dal (secular) was seen holding the chair to initiate proceedings. However, Congress legislators escorted Chairman K Prathapchandra Shetty, whereupon they forcibly attempted to evict the MP from the presidency, causing an uproar. The chairman meanwhile adjourned the session after all legislators left the house.

BJP leader S Prakash condemned the incident and described the action as “unfortunate”. He said, “The Legislative Council is known as the House of Elders and responsible behavior is expected from members across parties. Dirty politics took over the council, resulting in the chairman not resigning himself after Congress lost a majority after the BJP and JD (S) got together. “

Meanwhile, Congress MLC Prakash Rathod said the vice chairman had been “evicted” because it was an “illegal meeting”. Rathod stated, “The BJP and JD (S) illegally sat him in the chair when the house was out of order. It is regrettable that the BJP is acting unconstitutionally. The Congress initially asked him (Vice-Chair) to step down from the Chair. After that, we had to evacuate it as it was an illegal session. “

Legislators from all parties are now holding separate consultations to plan the next step. Filing the controversial anti-cow slaughter law is also currently in limbo due to the heated developments.

Download the Indian Express App for the latest news from Bangalore.