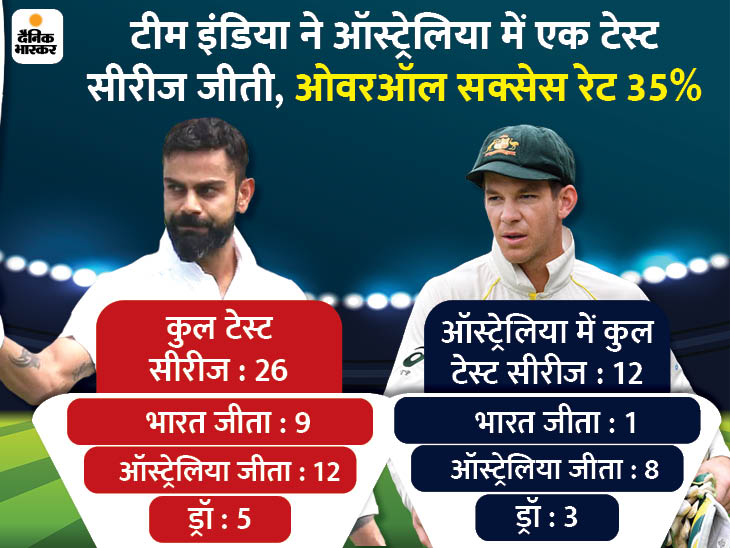 The Indian team has to play a 4-Test series on Australia tour. The first Test will be played from December 17, which will be day-night. Team India has defeated Australia in the last two Test series. In such a situation, India has a chance to win 3 consecutive Test series against them.

Team India had defeated Australia 3–1 in their home last time. It was the team’s first Test series win in Australia. India has lost 8 out of 12 series and played 3 draws so far in Australia.

Pujara, Rahane, Pant and Rahul will be key players for Team India
Indian team captain Virat Kohli will go on paternity leave after the first Test. Ajinkya Rahane will take over the captaincy in the remaining three matches. In such a situation, Cheteshwar Pujara, Rahane, Mayank Agarwal, Lokesh Rahul and Prithvi Shaw will be key players for the Indian team after the first Test.

Pujara was the top scorer in the Test series against hosts Australia in 2018. He was the only player to score 500+ runs and score 3 centuries. Apart from him, Rishabh Pant (350) and Virat Kohli (282) were the only Indian batsmen in the top-3.

Rohit will not play in the first two Tests
Injured Rohit Sharma has returned to the team after getting fit. They will soon reach Australia. Due to the 14-day quarantine period, Rohit will not be able to play the first Test. He does not seem to be able to play in the second Test as well. Pujara is the lone top-5 Indian from the current team in terms of maximum runs against Australia.

Bowling on Bumrah-Shami
The bowling will again be on the shoulders of the top wicket-takers of the 2018 series Jaspreet Bumrah and Mohammed Shami. Ravichandran Ashwin, Kuldeep Yadav, Ravindra Jadeja and Umesh Yadav will also have experience of previous tour. In the previous series, Bumrah had won the series with 21 wickets and Shami took 16 wickets.

Young bowlers have a chance
This time Navdeep Saini and Mohammed Siraj will be touring Australia for the first time. With Shami, Bumrah and Umesh, it is difficult for either of them to get a chance in the playing XI. If any of them are selected in the playing eleven, then they will have a big chance to confirm their place.