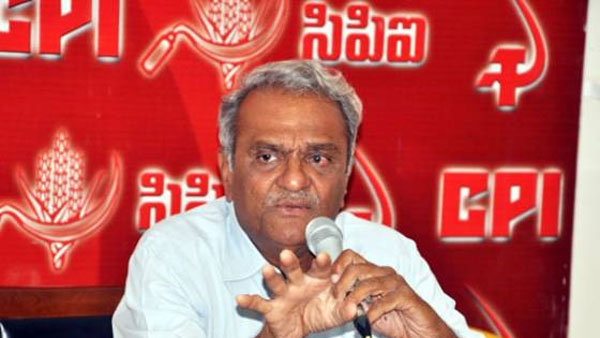 Will the Supreme Court respond to Jagan’s letter?

CM Jagan wrote a letter to the Chief Justice this year alleging that Supreme Court Justice NV Ramana, along with some other judges of the AP High Court, were conspiring to destabilize their government, which was elected last year in the AP. There has been no response to this letter so far. But is the Supreme Court collegium responding to this behind the scenes? Is Jagan preparing for the next steps based on the points mentioned in the letter? There is a lot of hype about whether an announcement will be made soon. Whatever the facts, the latest remarks by CPI (M) national leader Narayana seem to reinforce this.

CPI leader Narayana Singh has recently made sensational remarks that CM Jagan is working hard in Delhi to transfer the AP High Court Chief Justice as part of the ongoing battle between the YCP government and the High Court in the AP. Without stopping there, they are lobbying to this extent with the central government officials in Delhi. Narayana alleged that the Center was also playing as Jagan had said in the matter as Jagan was unconditionally supporting the Center. Narayana’s remarks almost meant that the removal of the AP High Court Chief Justice was imminent.

CM Jagan is leaving for Delhi this afternoon at the invitation of Union Home Minister Amit Shah. The discussion on what Jagan is going to discuss in the meeting with Amit Shah is already interesting. Despite the propaganda that Amit Shah is calling for Jagan’s support in the case of farmers’ protests, it seems that more than that is coming up for discussion.

Jagan’s letter to the Supreme Chief Justice, who is closely monitoring the aftermath, said that it seems that there will be transfers of four more High Court Chief Justices along with the AP High Court soon. There is already a rumor circulating in Delhi circles that the Supreme Court has taken a decision to this effect. So it is not clear whether the AP High Court is transferring the Chief Justice as well as other CJs as work in progress. If the decision is taken by the Supreme Court, it will be a huge blow to the AP government as well as CM Jagan. It will take a few more days for clarity to come.