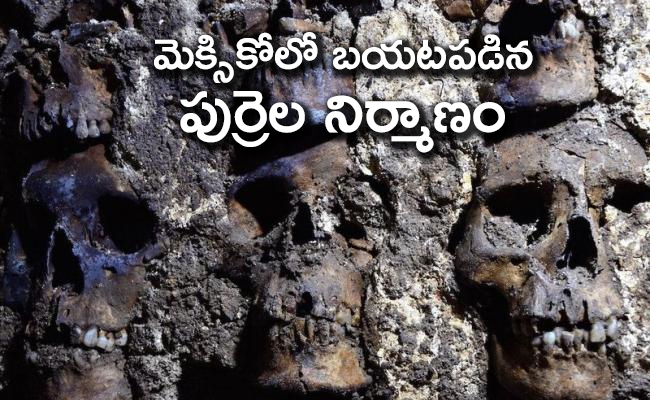 Mexico City: Usually stone walls, brick walls .. finally we heard about walls made of stick and lead .. we saw. But have you ever heard of a wall built with skulls … no? Read it though. MexicoAn ancient 15th century wall has been unearthed in. Archaeologists were shocked to see it. Because there are rows of skulls in this wall. Scientists have identified the skulls of females and males as well as children. Experts believe that all of them are sacrificed during Devata Puja. It is estimated that most of them will be enemy soldiers. Based on the head structure and the size of the teeth, the scientists found that there were three children in the skull. Archaeologists are still struggling to gather enough evidence before reaching the final conclusions about the location of the wall in 2017. A total of 600 skulls have been recovered so far. (Mystery: Mysterious beach that came to light2)

Archaeologists believe that the Aztec emperor may have built the wall as a warning to his opponents. The Aztec Empire was overthrown by the Spanish invaders in 1521. Scientists believe that most of the skulls that came to light in the construction of the wall were enemy soldiers, and some may have been civilians, all of whom were sacrificed to God. However, it is difficult to identify who are the enemy soldiers and who are the common people. The wall is believed to have been built in the late 15th century. It is located in the Meyer area of ​​the Tempo, one of the main temples of Tenochtitlan, the Aztec capital of the historic district of modern Mexico City. Scientists say it is one of the most important archaeological discoveries in the country. “Every step the mayor takes at the temple continues to amaze us,” Cultural Minister Alejandra Frosto said in a statement. (Read: Such miracles rarely happen)

“Hui Jompantley, one of the most fascinating archaeological excavations in our country in recent years. The human sacrifice that has come to light in Mesoamerica is considered a way to ensure the continued existence of the universe,” the statement said. Experts therefore consider the tower to be “a building of life rather than death”.