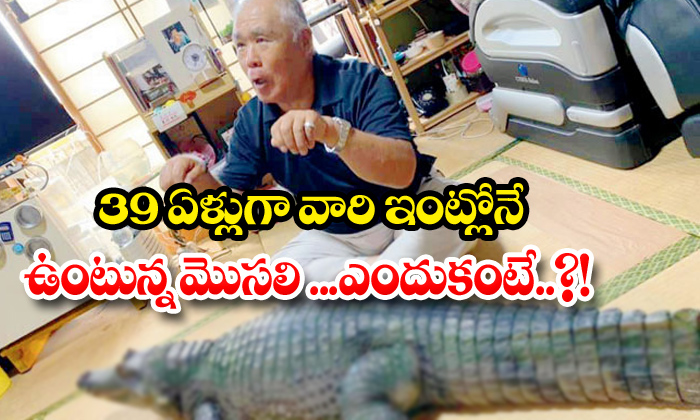 As tame animals in most homes in most countries of the world Cat If not here’s a new product just for you! Animal lovers are lions, tigers, snakes Raising is also something we occasionally see through social media.

However Japan Only one family from the country is united Crocodile Raising is now Viral Became.They last together 39 years From that With crocodile Having a relationship is really something to think about.

The crocodile is one of the most ferocious animals Crocodile Together with that family 39 Life goes on for years.

This is like a dog To the crocodile The crocodile was with them but left them with nothing to do.

Of Japan Cure in Hiroshima Son of Nabumitsu Murabyasi of the city 39 years Those who were in a shop when it was changed earlier Crocodile cubs Brought to their home.That’s not all Caiman-Sun Also named after.

Since then the crocodile has become one of their family members Weight 45 kg, 6.8 feet Nabumitsu says that the crocodile is very good.

No one has been injured so far.

However, he also sought permission from the country’s authorities to raise the crocodile in his home Walking He said that at first the locals were very scared to see them at the time of doing so, but gradually they got used to it as they did not know our bond there.

When the two of them came out like this, the children in the area with the crocodile, no matter what the crocodile did, it did not care at all. Crocodile Japan O in the country As a celebrity Has changed.