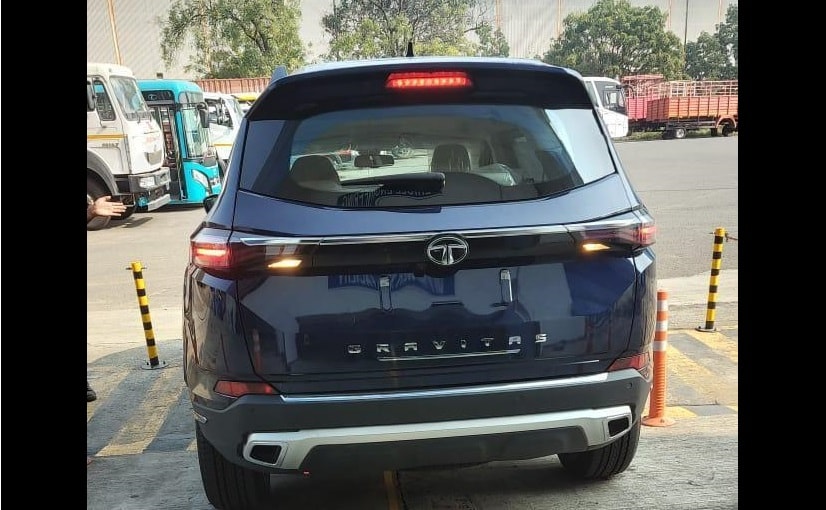 A new picture of the upcoming Gravitas has surfaced online and for the first time we can see the SUV without a camouflage.

The upcoming Gravitas 7-seater is one of the most anticipated SUVs from Tata Motors on the Indian market. The three-row version of the 5-seater Harrier that was unveiled at Auto Expo 2020 has been subjected to rigorous road tests for quite some time. We have already seen many heavily camouflaged spy pictures of the SUV. A new picture of the upcoming Gravitas has surfaced online and for the first time we can see the SUV without a camouflage.

The leaked image gives us a clear picture of the rear exterior design of the SUV, which remains largely identical to the Harrier SUV except for minor updates. The 7-seater Gravitas SUV has LED taillights, square wheel arches, roof rails, a roof spoiler, a large tailgate with Gravitas lettering, a massive rear window, a stronger rear bumper and much more.

Note that we cannot yet see the front profile of the SUV. Given the previous spy footage, we may also see some styling improvements to the front to help differentiate the two SUVs. It will have a cascading grille up front with a honeycomb mesh, projector headlights, square wheel arches, and much more.

On the inside, the brand new Tata Gravitas SUV will be equipped with a two-tone dashboard in oak brown, an 8.8-inch floating infotainment system with Android Auto and Apple CarPlay compatibility and voice recognition, and a 7-inch instrument panel. Premium seat cushions made of oak brown from Benecke-Kaliko, oak brown, JBL loudspeakers, three-spoke steering wheel and more.

In terms of drivetrain, the Tata Gravitas is powered by a BS6 compliant 2.0 liter 4 cylinder diesel engine made by Fiat. It’s the same device that powers the 5-seater Harrier SUV. The engine is designed for 168 HP and 350 Nm of power and is connected to a 6-speed manual transmission. The SUV is also offered with an optional 6-speed torque converter.