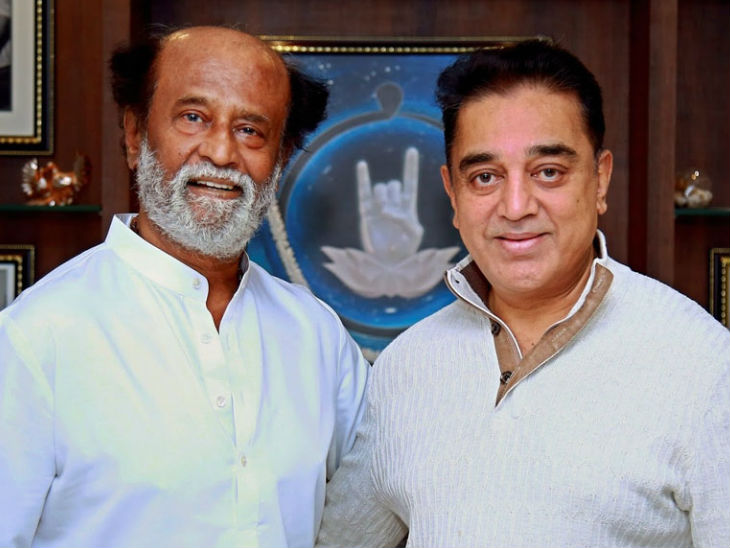 Assembly elections are due in Tamil Nadu next year. Kamal Haasan and Rajinikanth, two superstars active in politics, have spoken of coming together. -File photo.

South’s two superstars are ready to come together in Tamil Nadu politics. Makkal Needhi Mayam (MNM) Chief Kamal Haasan hinted at joining Rajinikanth on Tuesday. Haasan said- We are just a phone call away. If our ideology is the same and people will benefit from it, then we are ready to put our ego aside. We will help each other.

Assembly elections are due in Tamil Nadu next year. Responding to media questions about the alliance with Rajinikanth, Haasan said that now Rajinikanth has to take a decision in this regard. After this we will both sit down and discuss it.

We are just a phone call away. If our ideology is similar and if it would benefit the people we are ready to set aside our ego and co-operate with each other: Makkal Needhi Maiam (MNM) chief Kamal Haasan on being asked on “joining hands with Rajinikanth” pic.twitter.com/tWAb0sKDq6

Kamal Haasan had earlier hinted at an alliance with Rajinikanth. Haasan started his election campaign on 13 December. Kamal Haasan will visit Madurai, Theni, Dindigul, Virudhanagar, Tirunelveli, Tuticorin and Kanyakumari districts in a four-day campaign that runs from 13 to 16 December. Haasan launched the MNM party in February 2018. The party also contested the 2019 Lok Sabha elections, but did not win any seats.

A year ago, Rajni spoke to Hassan about an alliance
Here, the second superstar of South Rajinikanth has announced to announce his party’s name on 31 December. The actor also announced to contest the 2021 assembly elections. Rajinikanth also talked about tying up with actor Kamal Haasan last year. Rajinikanth had then said that in the event of an alliance with Kamal Haasan, he would definitely come to terms with the interests of the people of the state.

Rajinikanth is the sixth actor in Tamil Nadu politics

Rajinikanth has been active in politics for the past several months, but for the first time he opened his cards about political innings. After announcing the formation of the party and contesting the assembly elections, there will be another actor’s entry in Tamil Nadu politics. Earlier, film artists have been successful in politics.