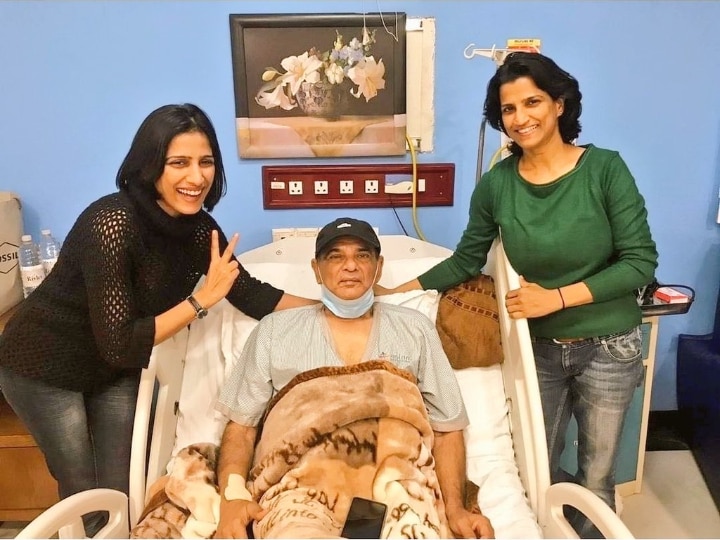 New Delhi: Sushant Singh Rajput’s untimely death shocked family members, friends and the film industry. The ‘Pavitra Rishta’ star, known for his acting skills, was found dead in his apartment on June 14th. It’s still hard to believe that a talented actor like Sushant is no longer with us. The SSR, successfully moving from television to cinema, was considered one of the most promising actors of the younger generation.

A photo of Sushant’s father KK Singh is making the rounds on the Internet. According to paparazzo Viral Bhayani, KK Singh was hospitalized for heart problems. He was reportedly admitted to Faridabad Asian Hospital. Sushant’s father rests in bed while Priyanka and Mitu stand next to him. The image went viral on social media in no time.

As soon as the photo went viral, fans sent their best wishes to Sushant’s father and prayed for his speedy recovery.

Sushant Singh Rajput’s father had registered an FIR in July 2020 against Rhea Chakraborty, her family members and other people in various departments of the IPC at the Rajiv Nagar Police Station in Patna. He accused Rhea and five others of facilitating suicide in his complaint. The Supreme Court ordered a CBI investigation into Sushant’s death on August 19, and the Central Authority launched an investigation into the matter.

The Enforcement Directorate (ED) and Narcotics Control Bureau (NCB) are also investigating the high profile case that has been in the spotlight for the past few months. The NCB arrested Rhea Chakraborty and her brother Showik Chakraborty in September 2020 under various sections of the NDPS law. Rhea was given bail in October after being behind the bars for almost a month. Showik was released from prison after almost three months earlier this month.

Speaking of Sushant: The last film by the ‘Kedarnath’ actor ‘Dil Bechara’ premiered on July 24th on Disney + Hotstar. The romantic drama, the official adaptation of John Green’s novel The Fault in Our Stars, was Sanjana Sanghi’s Bollywood debut.

Please note: the photo was distributed online and ABP News does not vouch for its authenticity.