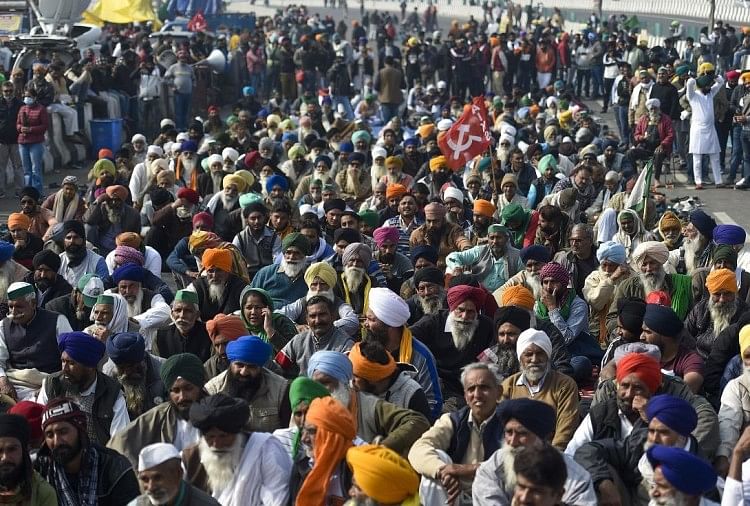 Farmers on the borders of Delhi are not ready to move against the three agricultural laws of the Center government. These organizations are adamant on withdrawing agricultural laws. The court will hear again on Thursday (today) on the petitions that remove them from the road. Today is the 22nd day of peasants’ protest. The Supreme Court has given notice to the Center and asked for the names of farmers’ organizations blocking the way. The government will name them in the court. At the same time, eight farmers’ organizations have also been served notices in the Supreme Court.

During the hearing on Wednesday, the Supreme Court said, the solution has not been seen from the talks between the government and the farmers so far. It had to fail. We form a committee on both sides, which will negotiate amongst themselves and end the deadlock. The apex court has also issued notice to the Center and others on the filed petitions and sought answers.

What happened during the hearing?
A bench of CJI SA Bobde, Justice AS Bopanna and Justice V Ramasubramanian told the Solicitor General Tushar Mehta, appearing on behalf of the Center, “Your (government) talks have been inconclusive, it is likely to fail even further.” You are saying that you are ready to negotiate. In response, Mehta said, yes we will talk.

To this, the bench said, “Name the farmers’ organizations who have blocked the road.” We form a joint committee, which will have representatives from government and farmer organizations, this committee will negotiate among themselves and end this deadlock.

The bench said, as this matter is now seen to be of national level, you should also include representatives of farmer organizations across the country.

On this, Mehta said, we can give the names of the organizations from which the government is talking. It has members from the Bharatiya Kisan Union and some other organizations. Mehta further said, but now it seems that some other people have captured the farmers’ protest. The problem is that the agitating farmers want the law to be withdrawn.

The government ministers wanted to discuss the farmers with their objections to the law, but they (farmer leaders) refused. They have a choice of only two answers on the demand to withdraw the law – yes or no. Whereas the government wants to speak concretely and positively on every point.

Because farmers understand that the law is against them
In response to Mehta’s plea, the CJI said, “The farmers understand that the law is against them.” So your conversation failed and it had to happen. If the government wants to solve the issue, then bring the farmers before us, who want a solution through dialogue. The court proposed to form a joint committee before the lawyers of all the parties and asked for a list of the names of the members for the committee.

In case of law and order, there can be no permanent precedent.
On referring to an order of the apex court on behalf of the petitioner regarding Shaheen Bagh, the bench bluntly stated that there can be no permanent precedent in the matter of law and order. In fact, Rishabh Sharma, a law student, had argued that due to the jamming of the roads by farmers, the commuters are facing great inconvenience. Closing the road is against his fundamental right and in the Shaheen Bagh case, the Supreme Court said that no one can be allowed to close the road indefinitely. During the hearing, due to no one from the farmers, the bench asked the government, have you closed the road? In response, Mehta said, “We have not blocked the road. To this, the bench said, then who has prevented the farmers from coming to Delhi?”

Government will not do anything against the interests of farmers
Tushar Mehta told the bench during the hearing that positive talks were going on between the farmers and the government. He assured that the government will not do anything which is against the interests of the farmers. The bench asked Mehta to name the farmers’ organizations involved in the movement and asked the petitioners to make them plaintiffs.

Delhi has no role in resolving the dispute
During the hearing, Delhi Government lawyer Rahul Mehra said, “The farmers are frozen there in the interest of the country and the cold has also increased.” On this, Mehta said, Mehra is saying as if he is representing the farmers. On this, the bench asked both the lawyers to go out and do such things. At the same time, the bench said, Delhi government has no role in reconciliation of agricultural laws.

He said, the government should have formed a committee of farmers before passing the law in Parliament, which would discuss it. Then there was no discussion. Abhimanyu Kohar, the leader of the Rashtriya Kisan Mazdoor Sabha, one of the organizations involved in the movement, said, “We have rejected such a proposal of the government earlier.”

Anyway, many rounds of discussions have already taken place between the ministers and farmer leaders of the government, that too was a committee. No solution will come out of all this. The only solution to our concerns is the withdrawal of law. The Bharatiya Kisan Union (Ekta Ugrahan) also said that the new committee has no meaning. We will be a part of the new committee only when the government withdraws the law.

‘The Supreme Court should decide on the constitutionality of the three agricultural laws. It is not the job of the judiciary to decide on the feasibility and desirability of these laws. It is a matter between the farmers and their elected leaders. Negotiations under the apex court are the wrong way. – Yogendra Yadav, leader Swaraj India