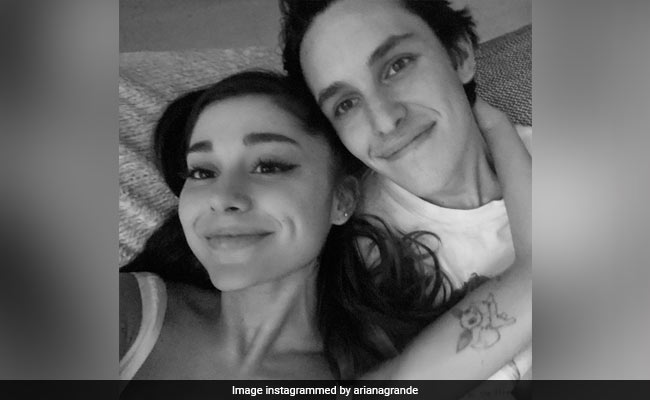 Singer Ariana Grande announced on Sunday evening that she was engaged by posting a series of photos of herself with her fiancé Dalton Gomez on her Instagram profile. The 27-year-old singer has also posted pictures of her engagement ring on social media. People magazine reported that Ariana Grande and Dalton Gomez started dating earlier this year. “They couldn’t be happier, they are just so excited. This is a happy time for them, both parents are delighted,” a source close to the couple told the magazine. Dalton Gomez is a real estate agent. Ariana Grande also posted a close up of the ring in the mail, titled “Forever and then some”.

Meanwhile, Ariana’s mom, Joan Grande, announced the big news on Twitter and welcomed Dalton to the family. She wrote: “I am very happy to have Dalton Gomez in our family! Ariana, I love you and Dalton so much! To a happy life afterwards! Yay!”

I am very happy to have Dalton Gomez in our family! Ariana, I love you and Dalton so much !!!! To a happy life afterwards! YAY! Xoxoxo

Ariana Grande and Dalton Gomez made their first official joint appearance in the music video Stuck with U, that was Ariana Grande’s duet with Justin Bieber. Then song released in May. Ariana Grande was previously engaged to Saturday night liveActor and comedian Pete Davidson in 2018. However, their relationship ended later that year. The singer will soon be releasing her documentary Sorry i love you, a film behind the scenes of their Sweetener world tour. It will be released on streaming giant Netflix.