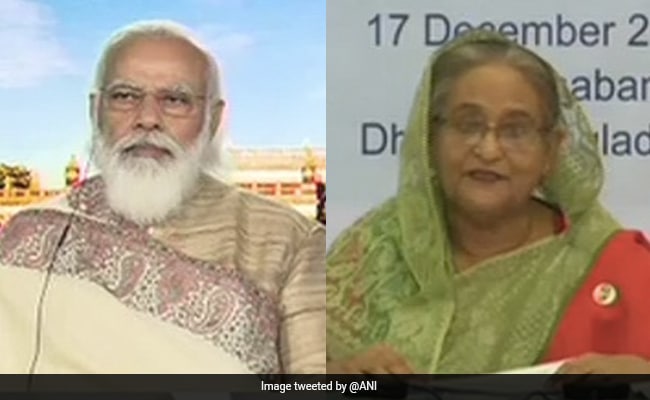 PM Modi and Sheikh Hasina spoke at a virtual summit.

India is our true friend, “said the country’s prime minister, Sheikh Hasina, thanking India for its support during the Bangladesh Liberation War in 1971. Ms. Hasina spoke one day after the 50th anniversary of India’s victory over Pakistan in 1991 a virtual summit with Prime Minister Narendra Modi in the 1971 war that resulted in the birth of Bangladesh as an independent nation.

“India is our true friend,” said Ms. Hasina. “I pay deep tribute to the three million martyrs who laid down their lives. I pay tribute to the members of the Indian armed forces martyred in the war and their families. I thank the government and the people of India who have expanded their unreserved support for the cause of our nation, “she said.

“We are proud to celebrate ‘Bijoy Dibosh’ with you to celebrate Bangladesh’s victory over the anti-liberation forces,” said PM Modi.

He also thanked his Bangladeshi counterpart for inviting him to visit the neighboring nation next year, where he said “it would be an honor” to pay tribute to “the martyrs”.

“It was central to me to strengthen relations with Bangladesh,” he said.

After the defeat in the war of 1971, the then Pakistani army chief Amir Abdullah Khan Niazi surrendered to the Indian armed forces together with his 93,000 soldiers.

At the virtual summit, India and Bangladesh sealed seven agreements to expand cooperation in various areas and re-established a cross-border rail link that was in operation until 1965. PM Modi and Mrs. Hasina opened a digital exhibition about Mahatama Gandhi and Bangladesh’s founder.