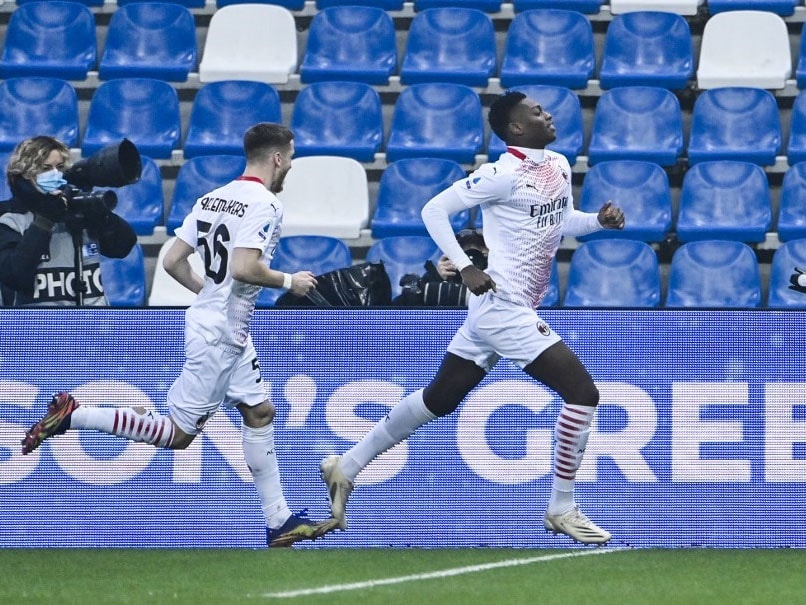 AC Milan striker Rafael Leao scored the fastest goal in Serie A history on Sunday when he scored a goal after just six seconds in a 2-1 win in Sassuolo that took his side ahead of city rivals Inter Milan Top of the table held. Milan, who won their first Serie A title since 2011, started immediately after kick-off. Turkish midfielder Hakan Calhanoglu prepared Leao for a quick start. The fastest goal so far in the Italian top division was Paolo Poggis for Piacenza against Fiorentina in December 2001 after eight seconds of playing time.

Here is the video of the target:

Rafael Leao with the fastest goal in Serie A history.pic.twitter.com/9kfb4lSfp2

Milan are one point ahead of Antonio Contes Inter, who defeated Spezia 2-1. Champions Juventus were four points behind the leaders in third place after a 4-0 win against Parma on Saturday.

“We wanted to start the game well because we missed it in the last few games,” said coach Stefano Pioli, whose side drew 2-2 in their last two league games against Parma and Genoa.

“We have four to five break patterns. Yes, he (Leao) was prepared. It was an important moment. I often tell young players that there are points that are worth more because they come at tricky moments.

“This game was very difficult from a mental point of view, we wanted to win and when we are successful we are very happy.”

Portuguese Leao, who normally plays on the left flank, started in the center-forward, with striker Zlatan Ibrahimovic still having a leg muscle problem and his replacement Ante Rebic also injured.

It was the 21-year-old’s third league goal this season and fourth in all competitions.

“We prepared it in training,” said Leao.

“This game was important to us because we had lost a few points in previous games.”

Calhanoglu believed he scored a second after nine minutes when he brought a Leao cross home but the goal was turned down as offside after a VAR review.

However, Alexis Saelemaekers doubled Milan’s lead in the 26th minute after Theo Hernandez did a good job.

Domenico Berardi retracted a late goal for Sassuolo, who finished sixth after the defeat with 23 points.

At San Siro, Inter Milan extended their winning run to six games, with Achraf Hakimi scoring the first five minutes after the break.

Romelu Lukaku scored a penalty after 71 minutes for his 11th league goal this season after a handball from M’Bala Nzola.

Roberto Piccoli scored a goal for Spezia in added time, which is just above the relegation zone.