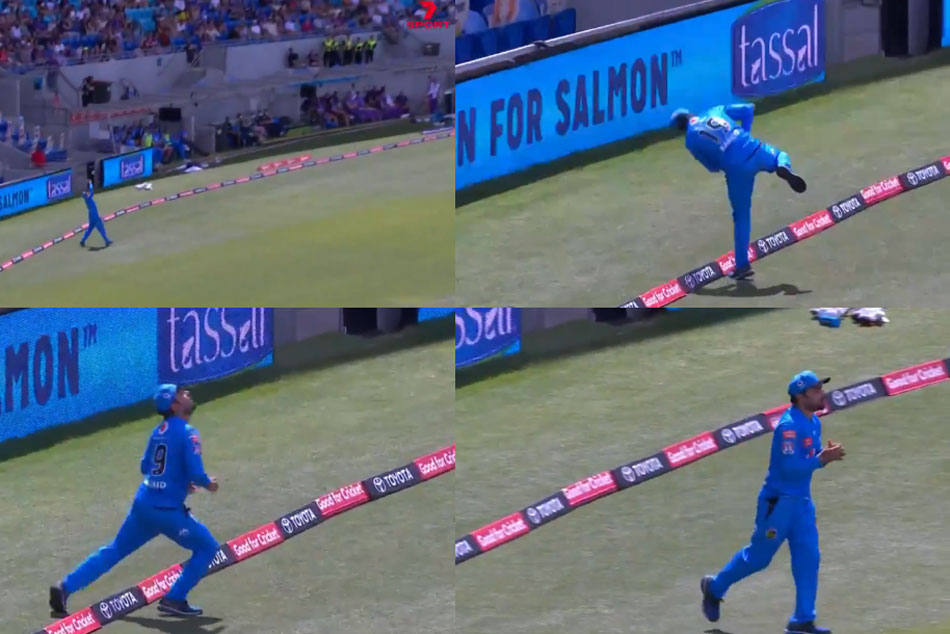 It is well known that the prestigious Big Bash League is currently taking place in Australia. The Adelaide Strikers and Hobart Hurricanes clashed on Sunday as part of the league. Rashid Khan, representing Adelaide, batted in the first innings of the Hobart team while fielding long on in the 16th over. At the same time Hobart batsman ‌ Ingram ‌ (25) was batting at the run .. played a huge shot to the fifth ball. Rashid received a fantastic catch at the boundary as the ball went for a six towards Long On. In the blink of an eye he caught the ball running backwards when he wanted to cross the boundary.

Rashid Khan lost control when he was caught running back at the boundary line. In such a situation he repeatedly lost his grip with one foot within an inch of the boundary line. Still holding the ball as well. He eventually dropped the ball into the gall and crossed the boundary and bounced back. Ingram was shocked. The video was posted on Twitter by the Australian cricket website website cricket.com.com. This video is currently circulating online.

The video of Rashid Khan’s catch went viral on social media. Fans who saw the video are showering praise on him. One tweeted ‘Rashid Super Catch’ and another tweeted ‘Stunning Catch’. Others hail it as the best catch in the BBL tournament. Rashid seemed to be good at fielding in this match. After that he failed in bowling and batting. Hobart scored 174 for the first five wickets. Adelaide were restricted to 163 for 9 in the innings. Adelaide lost by 11 runs.

Without Kohli, there would be no pressure on Rahane: Gavaskar