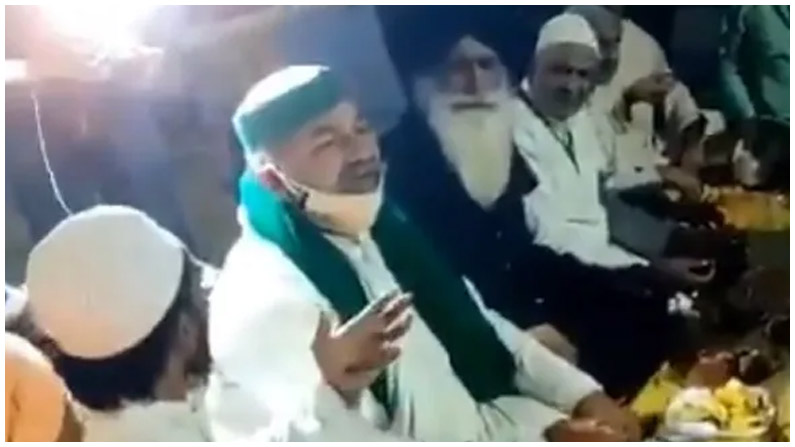 Rakesh Tikait Tunga, a leader of the Raitu Sangham (Indian Kisan Union), said that while the corona virus cases were still booming in the country, the Kovid rules had to be strictly adhered to.

Rakesh Tikait Tunga, a leader of the Raitu Sangham (Indian Kisan Union), said that while the corona virus cases were still booming in the country, the Kovid rules had to be strictly adhered to. An Iftar dinner was given to Muslims and farmers at the Ghazipur border in violation of these rules. The video went viral on social media. But he said there was nothing wrong with them, that everyone present at the dinner was sitting at a reasonable distance and that no one was actually hugging or shaking hands with each other. (However, if you watch the video, you will hear comments about how far they are sitting from each other). Tikayat said the government had allowed 50 people to meet in one place. He said the Iftar party he organized was attended by only 22 to about 35 people. He demanded that farmers be given Kovid vaccines.

He said that all the farmers were at home during the Kovid and what would they tell them to go to a particular place. ‘ Is the corona spread here on the Ghazipur border? We’ve been here for the last 5 months! ‘ He said. Commented that it was now their home. He urged the government to set up a camp here to give vaccines to food donors. He recently made it clear that despite the lockdown across the country, food donors would not give up their concerns. Rakesh Tikait revealed that they will continue their protests seeking the repeal of the three controversial laws. However, he said farmers in troubled areas would follow the Kovid Rules.

Blocking oxygen tanks… And delaying them.

See more here: Supreme Court: The Supreme Court is serious about the center on corona calm .. Notices to plan for virus building

Gutta Jwala as the bride .. The bride and groom who will be getting married soon .. Photos viral ..