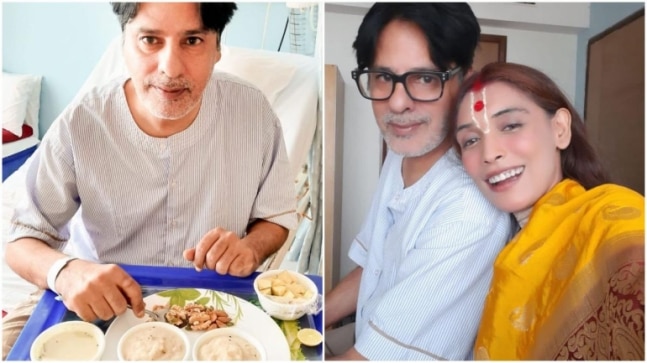 Rahul Roy, who recently had a stroke, shared a series of photos from the hospital. The actor wrote that with the help of his sister and doctor, he is recovering well.

Rahul Roy announced that he is recovering well with the help of his sister and doctor.

Actor Rahul Roy, who suffered a stroke in extreme weather conditions in Kargil, is recovering well after sharing photos from the hospital. The actor has shared a few photos, some of which also show his sister Priyanka Roy. In his Instagram post, Rahul revealed that he is on the road to recovery with the help of his doctors and sister. The actor was flown to Mumbai from Srinagar after his health deteriorated during filming.

Rahul Roy is currently being admitted to the Wockhardt Hospital in Mumbai. He now has a speech disorder called aphasia and has had an operation for it.

A few days ago he shared a video showing him with his sister. In the video, the actor said that he was taking his speech therapy and that he had improved a lot.

WHAT HAPPENED TO RAHUL ROY?

Rahul Roy suffered a stroke while filming his upcoming film LAC: Live the Battle in Kargil in extreme weather conditions in Kargil. He was flown from Srinagar to Mumbai by helicopter. Rahul, who lives alone, was taken to Nanavati Hospital and taken to the intensive care unit there. His wife and sister were later informed of his health. He was later transferred to the Wockhardt Hospital.

Rahul Roy made his Bollywood debut with Mahesh Bhatt’s 1990 film Aashiqui. The film was a huge hit and made Rahul an instant star. He then made films such as Sapne Sajan Ke, Jaanam and Junoon, among others. He also won the first season of Bigg Boss.

ALSO READ | Aashiqui actor Rahul Roy suffers a stroke while filming in Kargil and is transferred to the intensive care unit: report