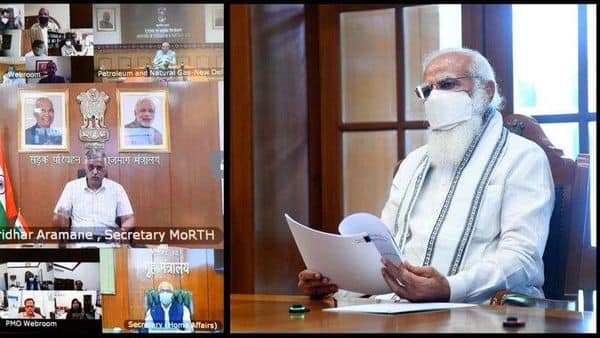 Prime Minister Narendra Modi chaired a high-level meeting Thursday to review oxygen supplies across the country and discuss ways to increase availability as the more deadly second wave of Covid-19 hits the country.

PM Modi has called for innovative ways to support healthcare facilities with oxygen. “States should strongly refrain from hoarding oxygen,” said the prime minister at today’s review meeting on oxygen supply and availability.

Officials briefed PM Modi on efforts to improve oxygenation over the past few weeks, the news agency ANI quoted the Prime Minister’s office as saying.

“The Prime Minister spoke about the need to work quickly on several aspects: increasing oxygen production, increasing the rate of distribution and using innovative methods to provide oxygen support to healthcare facilities,” he added.

At the meeting, which also discussed ways and means of increasing oxygen availability, PM Modi was told that the supply of life-saving gas to states had steadily increased.

“PM was informed that measures will be taken in coordination with the states to determine their demand for O2 and to ensure an adequate supply. Against the current demand from 20 states of 6,785 tons of liquid medical oxygen per day, the Indian government has from April 21, 6,822 tons / day allocated to these states, “added the PMO.

“It has been found that in the past few days the availability of liquid medical oxygen has increased by 3,300 tons per day due to contributions from private and public steel mills, industries, oxygen manufacturers and the ban on O2 supplies to non-essential industries.” the PMO added.

“Officials informed PM that they are working with states to operationalize sanctioned PSA oxygen systems as soon as possible. PM instructed officials to ensure that states are smoothly supplied with oxygen,” it said.

The statement said the railways are used for the fast and uninterrupted long-distance transportation of tankers. The first rake reached from Mumbai to Vizag to transport 105 tons of the liquid medical oxygen. Similarly, empty oxygen tankers are also being shipped to oxygen suppliers to reduce one-way travel time for the oxygen supply.

The Prime Minister has been informed that an extensive exercise will be carried out in coordination with states to determine their oxygen needs and ensure adequate supplies, the statement said.

Representatives of the medical community also discussed the need for sensible use of oxygen and how an audit in some states has reduced oxygen needs without harming the condition of patients.

The meeting was attended by the cabinet secretary, chief secretary of the prime minister, interior ministers, health ministers and officials from the Ministry of Trade and Industry, the Ministry of Road Transport, Medicines and NITI Aayog.