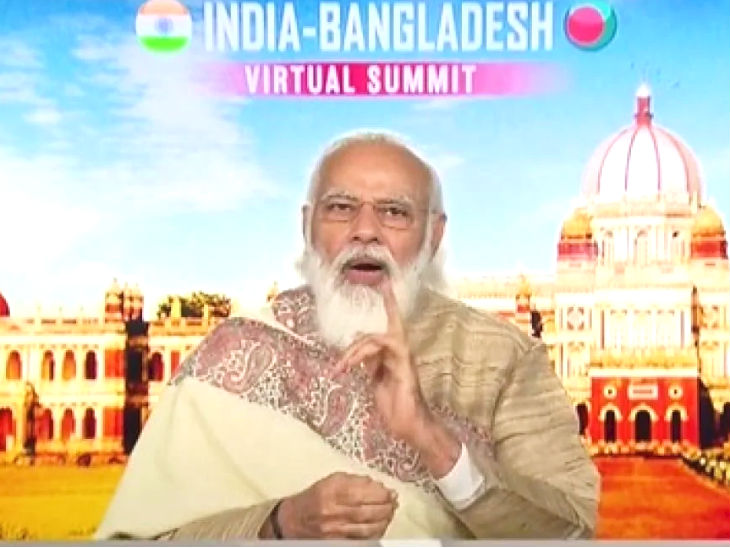 Prime Minister Narendra Modi and Bangladesh PM Sheikh Hasina attended the India-Bangladesh Virtual Summit on Thursday. The two jointly inaugurated the Chillati-Haldibari rail link. With this, 5 out of 6 rail links closed since 1965 will be resumed.

Bangladesh is celebrating the 50th anniversary of victory in the 1971 war. This is why this virtual summit was organized. Modi said that the Prime Minister of Bangladesh has shown great courage in the fight against Corona. During the Corona era, there was good cooperation between the two countries on health services. India will also help Bangladesh in all possible ways. Bangladesh is an important part of our ‘Neighbor First’ policy.

Youth will continue to take inspiration from Gandhi and Mujib
The two leaders inaugurated the ‘Bangabandhu-Bapu’ digital exhibition. Modi said that it is a matter of pride for me that I have inaugurated the Digital Exhibition on Mahatma Gandhi and Sheikh Mujibur Rahman. The youth of both countries will continue to draw inspiration from these great personalities. At the same time, Hasina paid tribute to the Indian soldiers who died in the 1971 war. He said that I am thankful to the Government and people of India, with whose support we got freedom.

What is Chillati-Haldibari link?
The Chillhati-Haldibari rail links are between India and Bangladesh. It has been resumed. This link was closed during the 1965 war between India and Pakistan. With the introduction of this link, connectivity between Bangladesh to Assam and Bengal will be improved. Initially this link will be used for goods movement, later passenger service can start.