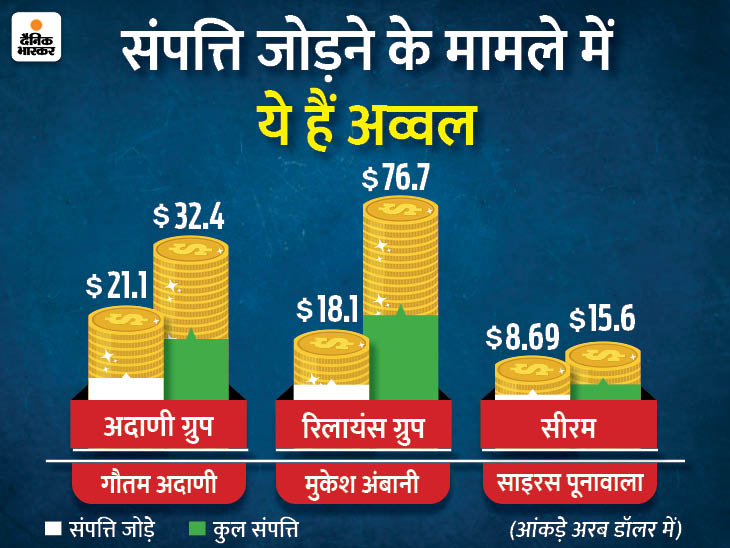 Kovid-19 may have forced the entire world to remain locked at home, but it has been positive for the business man. In the year 2020, 7 billionaires of India have added $ 64 billion to their wealth, since the fatal consequences of the corona epidemic have started to wane and the economy is starting to recover a bit.

The Billionaire Index data showed that the total wealth of these 7 billionaires was on December 11, with $ 194.39 billion. So far this year it has risen to 50 percent. The rupee was at 73.64 against the dollar on Friday. That is, 1 billion rupees was worth 7,364 crores. Gautam Adani, the first generation entrepreneur to build his empire in renewable energy, ports, terminals and logistics, has added $ 21.1 billion to his wealth in 2020 so far. At the end of last year he had assets of $ 11.3 billion. It now stands at $ 32.4 billion.

The richest Indian business man Mukesh Ambani has added $ 18.1 billion to his wealth. His total assets have reached $ 76.7 billion. His wealth stood at $ 58.6 billion at the end of last year. Ambani is the owner of India’s most valuable company Reliance Industries. The company dominates in oil-gas, telecom and retail. India’s Vaccine King Cyrus Poonawalla’s wealth has increased by $ 6.91 billion. His wealth has grown to $ 15.6 billion. He is the owner of Serum Institute of India.

This company is making Corona medicines. Pune-based serum is not listed on the stock market. Shiv Nadar of HCL Technologies and Azim Premji of Wipro have added $ 6-6 billion.

Nadar’s company HCL Tech is India’s third largest IT exporter. He currently has a net worth of $ 22 billion. Wipro’s Premji’s assets have grown to $ 23.6 billion. The Corona crisis has created new opportunities for IT companies to find solutions. Famous investor and hypermarkets D-Mart chain owner R.K. Damani’s wealth has increased from $ 4.71 billion to $ 14.4 billion. Dilip Sanghvi of Sun Pharma now has assets of $ 9.69 billion, up from $ 2.23 billion earlier.

Gautam Adani’s stock has been strong. Most of the gains were in Adani Green Energy shares. The stock has grown 5 times. The market cap of Adani Green has increased to Rs 1.63 lakh crore as against Rs 26 thousand 40 crore on December 31, 2019 on Friday. Adani Gas shares have tripled. Adani Enterprises shares rose 1.15 times, Adani Transmission shares rose 28%. Adani Power shares have fallen 27.91% during this period.

Though Mukesh Ambani has six companies listed in India, but most of his earnings are from Reliance Industries. The highest market cap on BSE is Rs 13.56 lakh crore. It was Rs 9.59 lakh crore as on December 31, 2019. His five other companies also have significant gains in shares. The BSE Sensex has gained 11.5% in the current year so far.