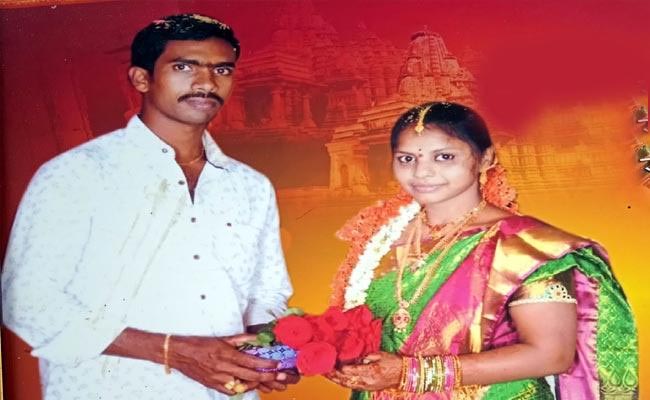 The husband was upset when his wife was not with him. Blown severely for her. Godavari wanted to jump into the river when her sandals appeared. He himself immediately jumped into the river in a rage for her. But as expected, the wife appeared at her birthplace. Her husband was lost in Godavari.

Witness, Mango: The incident took place in Pedapatnam village on Monday when the husband also jumped into the Godavari river after his wife jumped into the river. Eventually the wife breathed a sigh of relief at the news that the relatives’ house in Palakollu in West Godavari district was safe. Yarramsetti Venkataravikumar (28), a young man working as a mason in the village, jumped over the Passarlapudi bridge in Godavari and got lost. Read: (‘Ramyasree was beaten to death ..’)

According to police and locals, the couple watched TV till 11 pm on Sunday. Wife Pushpasiva did not appear when her husband woke up at two in the morning to see what had happened between them at night. Went all over the house to find the wife. He felt that his wife had jumped into the river as the Mangala Sutras that were supposed to be around her neck were at home and the sandals she was wearing were seen on the banks of the river Godavari. He immediately came home with the sandals and showed the sandals to his mother, made sure they were his wife, and immediately took the bike and went to the Passarlapudi Bridge, about four kilometers away. He parked his bike there and jumped into the river Godavari. Local fishermen noticed this. Read: (Dying with aversion to life ..)

Venkataravikumar was married to Pushpasiva for three years. They have an 11-month launch. They also booked tickets to go to Tirupati on January 20 and have a hair transplant. Meanwhile, his family members are shedding tears over the tragedy. Locals said that Pushpasiva had disappeared in the past as well. Even now it was thought that he would go to the house of relatives in the same way. All in all, the presence of the wife and the loss of the husband filled the family with endless tragedy. Rajolu ASI D. Krishnamachari under the auspices of the city ASI T. Prasadarao case is being investigated. Carried out a galley in the Vainatheya river for a lost young man.