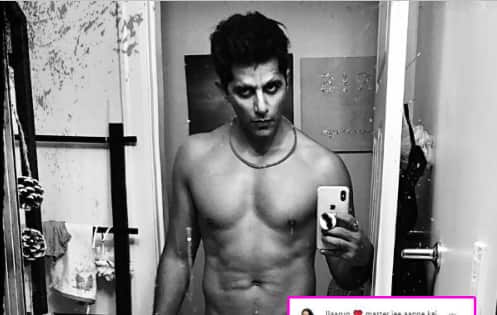 Karanvir Bohra is with his in-laws in Canada. He is there for the delivery of his third child. While Teejay Sidhu flew to her home country with Bella and Vienna a month ago, Karanvir Bohra has now joined them. He spent 14 days in quarantine before joining his family. Karanvir Bohra posted a picture wearing only his underwear. He put on Calvin Klein briefs and made a funny comment. Karanvir Bohra said there was no need to travel to the Maldives to focus on the basics. His comments made people about the ROFL. Also read – Kapil Sharma, Bigg Boss 14, Asim Riaz – here are the TV newsmakers of the week

Karanvir Bohra wrote: “Ok, so many people ask me as an actor that you must have a great body. Why don’t you have sixpacs, why not have a muscular body? Here is my take on my body: I’ve been in a #catabolic state since For over a year I like this active state, it keeps me fresh and charged, just added a little #yoga and very light weights to make my body supple and toned, as an actor that your body needs to be but adaptable, malleable. You have to work on your body in different ways to get different results. So you have to mix and match your workouts. Every character is the same. This works for me, so not extreme #anabolicworkouts for now. But will start soon, for a role or so. ” Also Read – Bigg Boss 12’s Karanvir Bohra and Ms. Teejay Sidhu travel to Canada before the birth of their third baby