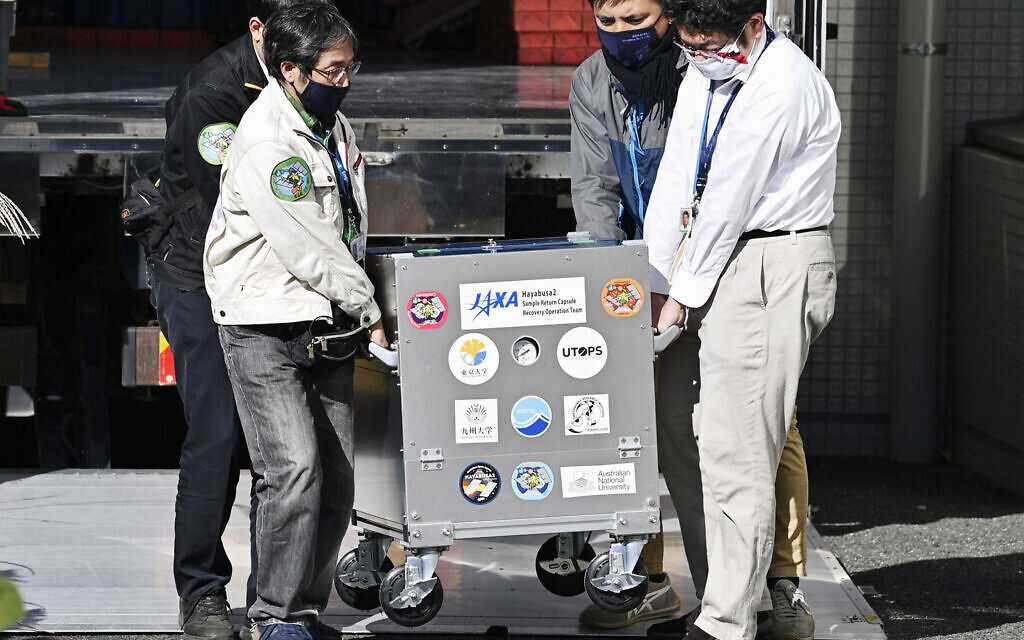 TOKYO (AP) – Japanese space agency officials said Tuesday they found more than expected amount of soil and gases in a small capsule that the country’s Hayabusa2 spacecraft brought back from a distant asteroid this month. They praised this mission as a milestone for planetary research.

The Japan Aerospace Exploration Agency said its staff initially spotted some black particles on the bottom of the capsule’s sampler when they pulled out the container on Monday. As of Tuesday, scientists found more soil and gas samples in a compartment that held samples from the first of Hayabusa’s two touchdowns on the asteroid last year.

“We confirmed a good amount of sand that appeared to have been collected from the asteroid Ryugu along with gases,” said Yuichi Tsuda, JAXA Hayabusa2 project manager, in a video message during an online press conference. “The samples from outside our planet that we have long dreamed of are now in our hands.”

Tsuda described the successful return of asteroid soil and gas samples as an “important scientific milestone”.

The photo released by the Japan Aerospace Exploration Agency (JAXA) shows black grains (right), presumably from Ryugu, in the sample container of the re-entry capsule from Hayabusa2 in Sagamihara near Tokyo, December 14, 2020. (JAXA via AP)

The pan-shaped capsule with a diameter of 40 centimeters was dropped on December 6 by Hayabusa2 from space to a predetermined location in a sparsely populated Australian desert at the end of its six-year round trip to Ryugu (more than 300) millions of kilometers from Earth.

The capsule arrived in Japan last Tuesday to conduct research that scientists hope will provide insight into the origins of the solar system and life on Earth.

Hirotaka Sawada, a JAXA scientist, was the first to look into the capsule’s sampler. Sawada said he was “almost speechless” with delight when he discovered that the samples inside contained some expected to be the size of dust, but also some the size of pebbles.

Soil samples in photos shown in Tuesday’s presentation looked like piles of dark coffee grounds next to granules.

Scientists hope that samples from the asteroid’s subsurface can provide information from billions of years that is unaffected by space radiation and other environmental factors. JAXA scientists say they are particularly interested in organic materials in the samples to learn how they were distributed in the solar system and whether they are related to life on earth.

Sei-ichiro Watanabe, an earth and environmental scientist from Nagoya University who works with JAXA, said it was good news to have more samples than expected as it will expand the scope of the studies.

The image published by the Japan Aerospace Exploration Agency (JAXA) shows the asteroid Ryugu, captured by the Japanese spacecraft Hayabusa2 on November 13, 2019. (JAXA via AP, File)

The samples are from two touchdowns that Hayabusa2 performed on Ryugu last year. The landings were more difficult than expected due to the extremely rocky surface of the asteroid.

The first landing collected samples from Ryugu’s surface and the second from underground. Each was stored separately. JAXA said it will look into another subject, which will be used for a second touchdown next week, and continue an initial investigation ahead of later studies of the material.

After studies in Japan, some of the samples will be shared with NASA and other international space agencies for further research from 2022.

Hayabusa2 is now on an 11-year expedition to another asteroid to investigate possible defenses against meteorites that could fly towards Earth.

Give a Hanukkah gift that connects

At this time when so many are feeling isolated, here is a Hanukkah gift to unite you and those who are important to you to Israel, the jewish people and to each other.

Visiting Israel – or, in many cases, each other – is not that easy this year. So our connections through common values, ideas and discussions are more important now than ever.

A Times of Israel Community Gift Membership entitles your recipient to a full year membership benefit with a Special Price.

You are serious We appreciate that!

We are very pleased that you have read X. Times of Israel article last month.

That is why we come to work every day to provide indispensable coverage of Israel and the Jewish world for discerning readers like you.

So now we have a request. Unlike other news agencies, we haven’t set up a paywall. Since the journalism we do is expensive, we invite readers who The Times of Israel has become important to to join our work to support our work The fellowship of the times of Israel.