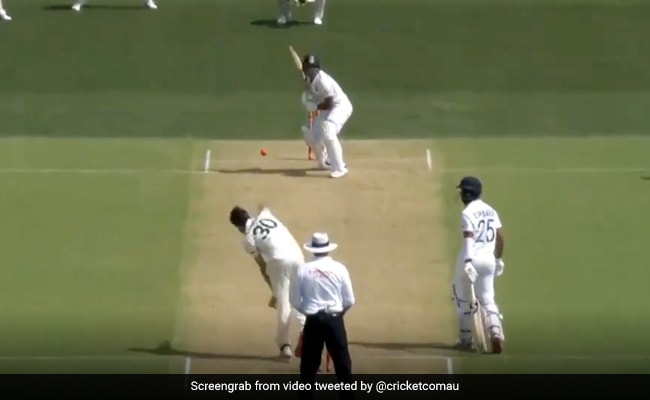 Ind Vs Aus 1st Test: The bowler hit the ball on the pitch, Mayank started seeing this after being bowled – see video

India Vs Australia: The Ind Vs Aus 1st Test match between India and Australia is being played in Adelaide Test. Team India won the toss and decided to bat first. But this decision was not right. The first session was completely named after Australia. Mitchell Starc first bowled out opener Prithvi Shaw, then in the form of Mayank Agarwal. Pat Cummins made Mayank Agarwal his victim. He bowled and bowled on the pitch in a magnificent style. After being dismissed, Mayank Agarwal looked at the pitch with surprise. Video is becoming increasingly viral on social media.

Australia had scored 32 runs losing 1 wicket in 18 overs. Mayank Agarwal was trying to freeze with Cheteshwar Pujara. Team India needed a big partnership at this time. But Pet Cummins dismissed Mayank Agarwal as soon as he arrived. Australia managed to dismiss the openers within 20 overs.

Patty with a peach!

Through the gate of Agarwal with a wonderful delivery! #AUSVINDpic.twitter.com/ZQjeHEHyuI

In India’s playing eleven, while Wriddhiman Saha has been preferred over Rishabh Pant as wicketkeeper, for Australia, Burns has been relying on poor form. Apart from this, Cameron Green is making his Test debut. Please tell that India’s captain Virat Kohli has decided to bat first after winning the toss. Whenever the Indian team has managed to win the toss under Kohli’s captaincy, most of the Indian team has won in those Test matches.

Under the captaincy of Virat Kohli, India has won the toss in 26 matches so far, winning 21 matches. Apart from this, 4 Test matches have ended on the draw. At the same time, Australia’s team has not lost a single Test match in the day-night test.