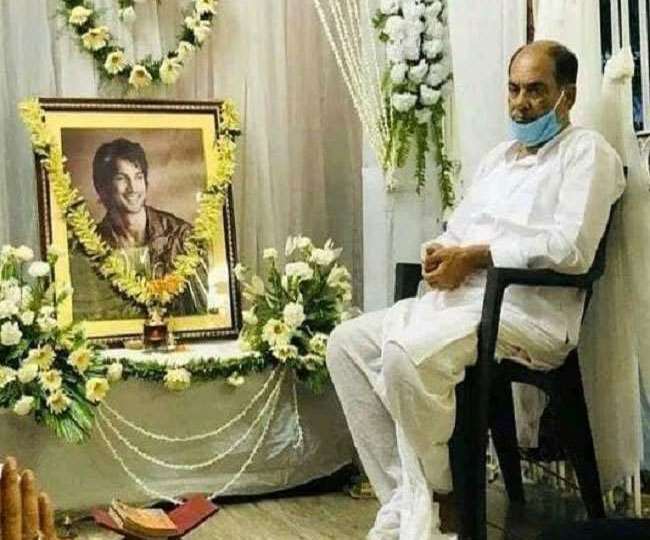 Patna, Bihar Online Desk. Since the death of Sushant Singh Rajput, the Bollywood actor, his entire family is in grief. Surrounded by this shock, his father KK Singh has suffered a heart attack. He has been admitted to a hospital in Haryana. The matter of relief is that his condition is improving. In his Instagram post by noted photographer Viral Bhayani, KK Singh has posted a picture in the hospital. After this, as soon as the news comes, the fans of Sushant are praying in the whole country including Bihar. KK Singh neighbors in Patna are also praying for his safety. Meanwhile, at the birthday party of Sushant’s ex-girlfriend Ankita Lokande, she has been trolled after the alleged photo of Sandeep Singh, who was in controversy in Sushant’s death case.

KK Singh is admitted in a hospital in Faridabad

According to the information, KK Singh, father of Sushant Singh Rajput, has been admitted to the Asian hospital in Faridabad due to heart problem, where his condition is improving. He is being looked after by Sushant’s sisters Priyanka and Meetu along with other family members.

Fans are demanding prayers in Patna

The picture of KK Singh’s hospital is going viral on the internet media, to which Sushant’s fans are responding. People of Patna-based Sushant Colony are also praying for him. Pramod Kumar, a resident of Patna’s Rajiv Nagar, believes that the cause of KK Singh’s daughter is the tension arising out of the son’s death. God fix them soon. Sanjay Raj and Anupam Singh of Rajiv Nagar say that they have seen Sushant’s childhood closely. People have emotional attachment with their family. Sushant’s father will soon return to Patna to recover.

Prayer for Sushant’s father all over Bihar

Anjali Sushant, a student of Loyla High School in Kurji, Patna, has been convinced of acting. Describing the shock of her father as natural, she says that the ointment of time will definitely heal this wound. Kaushal Kishore, an officer in Life Insurance Corporation of India in Motihari and Dr. Sanjay Singh of Muzaffarpur, also ask for blessings of KK Singh while saying the same. People are praying for Sushant’s father across Bihar, including businessman Jatashankar of Siwan, Ajay Singh of Saharsa and Pradeep Jha of Madhepura.

It may be noted that Sushant Singh Rajput was found dead on 14 June in his flat in Bandra, Mumbai, under suspicious circumstances. Dissatisfied with the Mumbai Police’s investigation into the case, Sushant’s father lodged an FIR in Patna. After this, a dispute arose between the Mumbai and Patna Police and the governments of Bihar and Maharashtra. At present, the CBI, ED (Enforcement Directorate) and NCB (Narcotics Control Bureau) are investigating this case separately from the angle.

… and because of this Ankita Lokhande is being trolled

Meanwhile, a new turn has come in Sushant’s death case that his ex-girlfriend Ankita Lokhande’s birthday party has been accused of participating in the controversial Sandeep Singh’s death case. Ankita is on trolls’ target after one such picture surfaced. Ankita’s response has not been received yet whether the picture is real or fake. Even Dainik Jagran does not confirm this. Dainik Jagran is only giving information about one such picture going viral and causing Ankita to be trolled.

Some people have also trolled Ankita to celebrate her birthday this year. However, there are also tweets in support of Ankita.