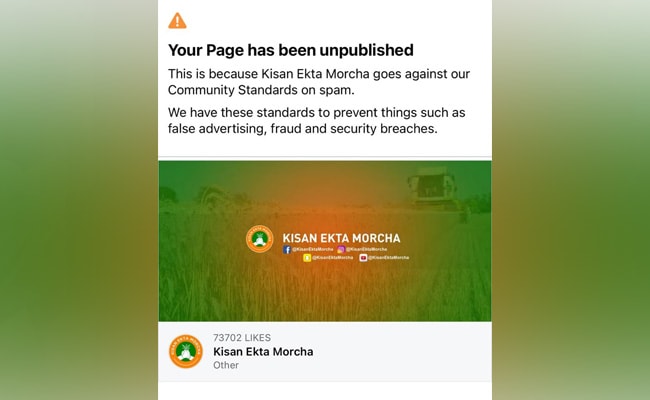 In fact, the Facebook of 7 pm on Sunday evening blocked the page of Kisan Ekta Morcha with more than 7 lakh followers. This is one of the largest pages used for the movement. Its manager had said that his access has been blocked by Facebook, Facebook said that he (farmers’ page) had gone against his community standards on spam.

However, Facebook reopened the page of Kisan Ekta Morcha. According to Kisan IT Cell, the ban on uploading new content on Instagram has also been removed.

Baljeet Singh of the IT cell of Kisan Morcha said in his statement, “The Facebook page was blown up at 7 pm today. We gave a reply to our live streaming today by taking a clip of what Modi ji said to the farmers. The secluded front had access to 54 lakhs and one lakh were our followers. We will hold a proper press conference tomorrow with all the farmer leaders. “

The page was republished when Baljit Singh went live.

Thousands of farmers have been camping on the borders of New Delhi for three weeks. Farmers are adamant on the demand for withdrawal of agrarian reform bills from the central government, the government says that the purpose of these agricultural reforms is to bring investment in the archaic agriculture sector, but the farmers say that these laws leave them at the mercy of big corporations will be given.

The protesters have repeatedly thwarted attempts to reach a compromise between Prime Minister Narendra Modi and his ministers, which has become the biggest challenge to the farmers of the country during his six-year rule.