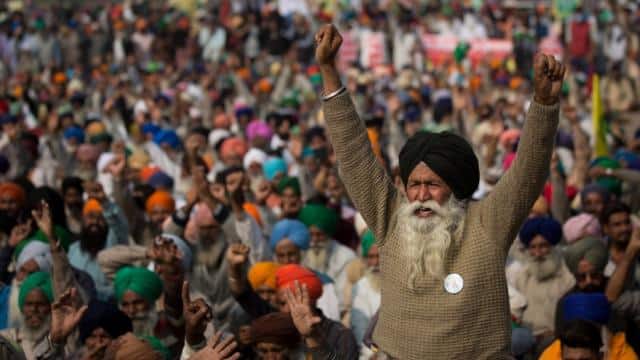 Farmers are raising their voice on the agricultural laws from the road to the Supreme Court. The Supreme Court on Wednesday indicated that it may set up a committee to remove the deadlock between farmers and the government, which is protesting against Delhi’s agitations against agricultural laws, as “it may soon become a national issue” “At the same time, the demonstrating farmer unions say that the formation of a new panel for agreement on new agricultural laws is not a solution, as they demand that the laws be withdrawn completely. They also said that legislation should be enacted by Parliament The government should have formed a committee of farmers and others before leaving.

Abhimanyu Kohar, the leader of the Rashtriya Kisan Mazdoor Sabha, one of the 40 farmers’ organizations involved in the movement, said that he has recently turned down the government’s offer to form such a panel. Swaraj India leader Yogendra Yadav has said on Twitter, “The Supreme Court can and should do the constitutionality of all the three agricultural laws.” But the judiciary cannot decide the feasibility and desirability of these laws. This is a matter between the farmers and their elected leaders. Negotiations will be the wrong course under court supervision. Swaraj India is also involved in the Samyukta Kisan Morcha, a group formed for the farmers movement and Yadav is currently sitting on a dharna on the Rajasthan border in Alwar.

The Bharatiya Kisan Union (Ekta Ugrahan), which is spearheading the movement on the ticker border, says that there is no point in the formation of a new committee at this time. Doing, which will eliminate middlemen and allow farmers to sell their crop anywhere in the country. The United Kisan Morcha has written a letter to the central government, demanding ‘parallel negotiations with other farmers’ organizations to stop the controversial laws.

While the government is saying that it is waiting for the reply of the peasant leaders, the Morcha says that there is no point in replying, as they made their stand clear in the last round of talks with the Union ministers. Given that they want complete withdrawal of laws. In a letter to Union Agriculture and Farmers Welfare Joint Secretary Vivek Agarwal, the Morcha said that the Center should stop ‘discrediting’ the ongoing protest against the agricultural laws.

Tight security arrangements were made at the Chilla border between Delhi and Noida earlier in the day as the peasant leaders were threatening to completely block this important border with the aim of pressurizing their demands. Thousands of farmers have been stuck on various borders of Delhi for the last 21 days, due to which many roads are also blocked. Hearing the matter, the apex court said that it would constitute a committee to resolve it.

Chief Justice S. a. Bobde, Justice A. s. A bench of Bopanna and Justice Ramasubramanian said, “In that we will include members of the government and members of farmer organizations. Soon it can also take the form of a national issue. We will also include members of farmer organizations from the rest of India. You should propose a list of the names of the members of the committee. ‘ The court, in favor of the farmers’ organizations in this case, has asked them to respond by Thursday. The bench told Solicitor General Tushar Mehta, “From your conversation it seems that the matter has not been made.”

Mehta said, “Now, it seems that other people have taken over the peasant movement.” The court also issued notices to the Center and others, hearing the petitions requesting the removal of the farmers blocking the various boundaries of Delhi and finding a amicable solution to the issue.

On the other hand, while addressing the online program in Gwalior, Agriculture Minister Tomar said that he is in talks with many farmers ‘organizations of the country including the farmers’ organizations of Punjab in this matter and a solution will be found soon. He said that the opposition parties who are misleading the farmers on the issue of agricultural laws will not succeed in their intention. Tomar said that the work of agricultural reform that has started will change the lives of farmers. He said, “Farmers across the country are supporting the new laws. Many organizations have met him. The farmers of Punjab are angry, but soon a solution will be found.

In Indore, Union Petroleum Minister Dharmendra Pradhan alleged that the anti-India and feudal forces are behind the ongoing agitation for the new agricultural laws, which is against the concepts of Indianism and self-reliant India. Standing up, “Agriculture Minister Narendra Singh Tomar has agreed to give written guarantee that the procurement system will continue in the country at the minimum support price (MSP). Then on what issue is the farmer movement going on?” “