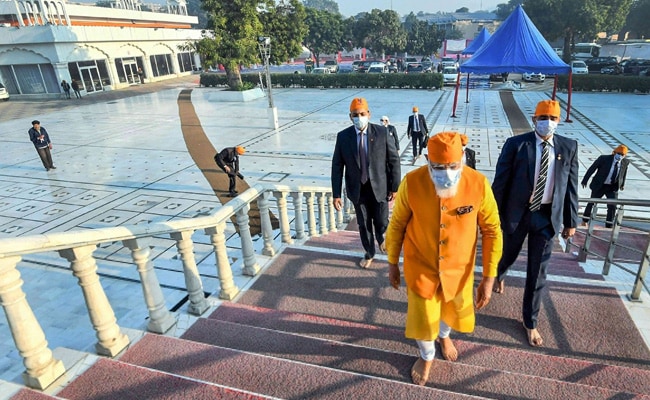 When Prime Minister Narendra Modi rounded off his unscheduled visit to a gurdwara in Delhi on Sunday, where he kneeled in respect and offered his prayers, a sermon advised: “You can be a religious person, attend satsangs (prayer meetings) and do seva (Service), but there has to be changes in your thinking that will really contribute to a better society. “

The Prime Minister visited the legendary Gurudwara Rakabganj in Delhi at a time when his government is facing great anger among farmers, many of them from Punjab, protesting new laws on how and where their products can be sold. The sermon was recited in the background by the granthi, or ceremonial reader in Punjabi.

The Prime Minister’s visit, organized for him with no special traffic or other arrangements, lasted about 15 minutes.

Farmers have been blocking several key entry points in Delhi for almost a month, arguing that the new reforms that the prime minister has assured them will actually benefit large companies that will dominate markets once they are deregulated. They want the laws to be withdrawn and a new legal commitment to be made on the minimum support price they can get for growing crops like wheat and rice.

The talks between the government and representatives of the farmers’ unions failed despite several long rounds. Last week the Supreme Court proposed setting up a committee of farmers and ministers to review the new reforms. The court also said the protests can continue for the time being and urged the government not to consider implementing the new laws until the matter is resolved.

During the agitation, protesters say at least 29 of them died, many of them from being outdoors during a severe cold spell. A Sikh priest from Haryana died of suicide last week, local police said. A note he left said he could not watch and “tolerate the injustice” inflicted on the peasants.

“I have felt very blessed,” tweeted PM Modi after visiting this morning. On Friday, he conducted a major exposure to farmers through a televised address from Madhva Pradesh in which he said they are being misled by the opposition for misunderstanding how important and useful the reforms will be.