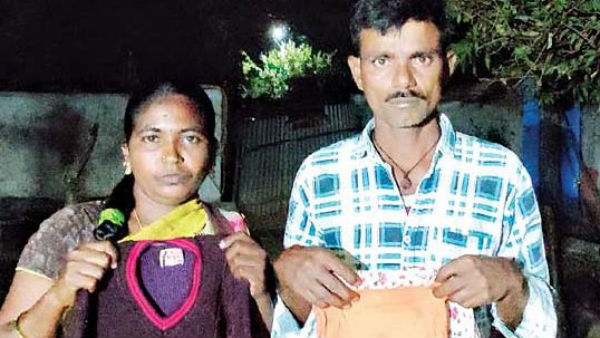 If this is the case, then Kola Yakayya and Shanta, a couple from Rainipatna, a suburb of Kuravi Mandal in Mahabubabad district, say that Geeta is their daughter. It is learned that Geeta came to Basra on Tuesday along with representatives of a non-governmental organization to locate their hometown.

The Yakayya couple, who saw the news about Geeta on a news channel on Wednesday night, were moved to tears as she was their daughter who went missing 15 years ago. They said their daughter was born in the year 2000 and was named after her courtesy. He said that he had not spoken since he was a child and that Saigale did.

The Yakayya couple said that they came to Hyderabad in 2005 for employment and lived in Suchitra area. When the daughter was six years old, Tamiddar left home and went to work, but was not seen when she returned. The next day, a complaint was lodged at the Jeedimetla and Kompally police stations as the whereabouts of Galinchina were not known.

In memory of childhood clothes ..

Even after that, the Yakayya couple were angry that they could not find him after searching for months. Tears were shed that they could not bear the loss of their only daughter and have been living with those memories of looking after their daughter’s clothes ever since. The courtesy said there were moles on the right face next to the eye and on the right shoulder. Yakayya and Shanta say that they will remember once they take themselves to Gita.

As it turned out, Gita explained with gestures that in her younger self they ate idlis and harvested more grain. According to her landmarks .. Gita was looking for her parents. Her parents are expected to be from Telangana or Chhattisgarh. However, her parents have not been located so far.