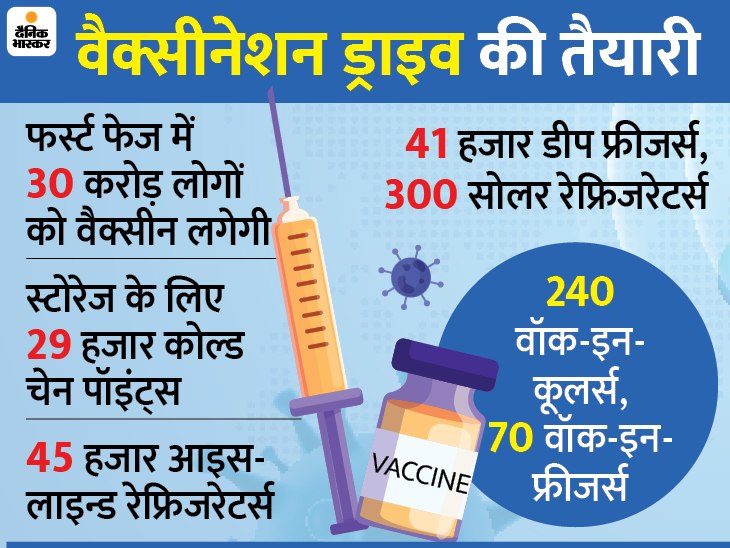 The Health Ministry has warned states about the side effects of the corona vaccine. Health Secretary Rajesh Bhushan said on Tuesday that states and Union Territories (UTs) have to be prepared for the reaction after vaccination. The government has claimed to make necessary arrangements for the storage of the vaccine. It contains 29 thousand cold chain points.

Vaccine reaction serious issue
“The vaccine reaction is a serious issue,” he said. The worldwide vaccination program lasts a long time. In such a situation, its side effects can also be seen in children and pregnant women after vaccination. In countries where vaccination has started, its side effects have also been reported. Especially in Britain, where cases of reaction were seen on the very first day after the vaccine was applied. In such a situation, it is necessary that the states should prepare fully for this in advance.

Reduction in corona cases in the country
He said that the cases of corona in the country are continuously decreasing. At present, only 7 thousand 178 cases are being reported in the country at 10 lakhs, while the figure is 9000 in the world.

Clinical trial of another vaccine approved
NITI Aayog member Dr VK Paul said that this week the Drug Controller General of India has approved another vaccine for clinical trial. The vaccine named HGCO19 has been developed by the Pune-based company Genova in collaboration with the Department of Biotechnology, the research agency of the Government of India. It is the country’s first vaccine made from mRNA technology.

Pfizer’s vaccine was also made on this technique
The Pfizer-BioNotech vaccine has been approved in the UK. Another American company Moderna has also sought approval for the emergency use of the vaccine. Both these vaccines have been developed on technology based on messenger-RNA i.e. mRNA and both are up to 95% effective.

Clinical trial of 6 vaccines is going on
They said, unlike Pfizer or some other vaccine, this vaccine would be able to be kept in a normal refrigerator, under normal cold chain conditions. Currently, 6 vaccines are undergoing clinical trials in the country.

Government in contact with farmers regarding Corona
He said that the government is taking all precautions in view of Corona for the farmers who are agitating against the agricultural laws. The Democratic process must go on, but we must also follow Corona’s guideline.