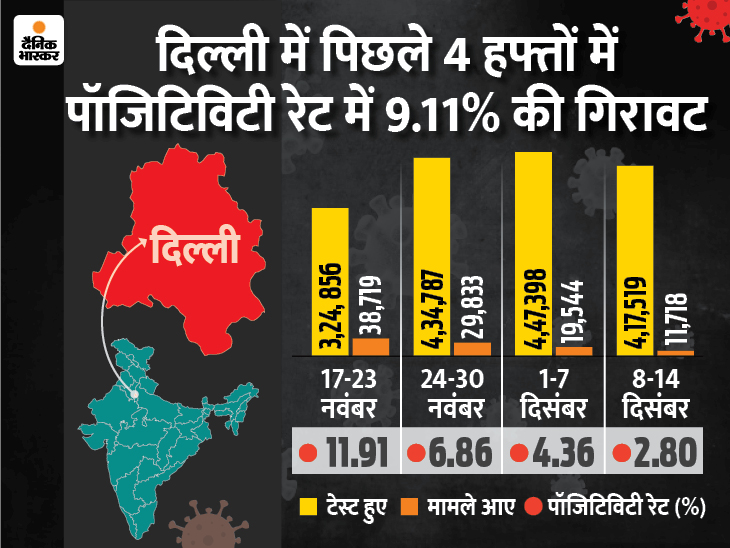 The number of corona patients in the country has crossed 99 million. In the last 24 hours, a total of 17 thousand 546 cases were reported and 27 thousand 478 people recovered from Corona. With this, the total number of infected in the country reached 99 lakh 2 thousand 943. Among them 3 lakh 40 thousand 943 patients are under treatment and 1 lakh 43 thousand 667 people have lost their lives. So far 94 lakh 15 thousand 86 people have beaten Corona in the country. These figures are taken from covid19india.org.

At the same time, there is good news for Delhi regarding Corona. A steep drop in positivity rate was recorded in Delhi. A total of 69 thousand 944 tests were conducted here in the last 24 hours, out of which only 1376 new cases were reported. That is, the positivity rate was 2.15%. This is the lowest ever in Delhi.

Regular classes of 10th-12th in Madhya Pradesh from December 18
Regular classes of 10th and 12th will be held in Madhya Pradesh from December 18. This decision has been taken keeping in mind the board examinations. The decision to start the 9th and 11th classes has been left to the district administration. The decision to open schools from 1st to 8th will be taken after a review of the corona infection. This decision will be applicable to all schools affiliated to MP Board and CBSE. MP School Education Department informed about it on Monday. Orders in this regard will be issued in a day or two.

66 students at IIT Madras Corona
The corona report of 66 students and 5 staff members at IIT Madras is positive. The institute was opened on December 7 for final year students by order of the state government. Now all the departments have been closed. According to the report, the first two cases were found in the campus only on 1 December. After this, some more reports came positive on 10 December and 14 December. There have been 55 cases here in three days. The campus was then declared a Kovid hotspot.

It is being told that at present there are 774 students in the campus. Everyone’s tests are being done and they are forbidden to go out. The maximum number of cases are in two hostels Krishna and Jamuna. Apart from these, some faculty members and mess employees have also been found infected.

State of 5 states
1. Delhi
On Monday, 1376 people were found corona positive. 2854 people recovered and 60 died. So far, 6 lakh 8 thousand 830 people have been affected by the infection here. Among these, 15 thousand 247 patients are being treated, while 5 lakh 83 thousand 509 people have been cured.