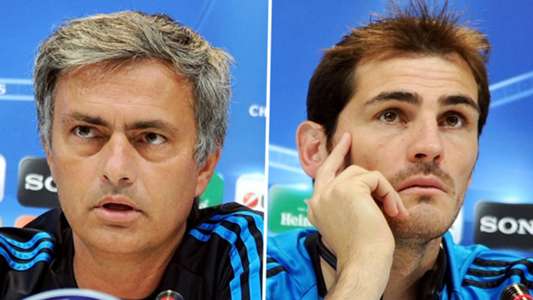 Iker Casillas shared his relationship with Jose Mourinho while at Real Madrid.

Frictions between the two at the Santiago Bernabeu eventually led to a public argument, with club legend Casillas being ousted from the first team and Mourinho ultimately ousted from his position as manager.

Casillas says he wasn’t a fan of Mourinho’s off-field antics – especially when he caught the eye of then-Barcelona manager Tito Vilanova – which contributed to the deterioration of their relationship.

“In August 2011 there was a players strike,” Casillas explained in Colgar read Oh, a Movistar + Documentary.

“As captain, I spoke to my team-mates and we decided we weren’t going to play, which meant that the season’s opening games wouldn’t take place. We said a few things that neither of us liked and took badly, but it was left there. Then came the Super Cup.

“We made a terrible impression. There were shreds, battles that gave heart and soul … but the other things (that caught Vilanova’s eye) – that was the kind of thing you might see in other clubs – sticky clubs that have to resort to things like that , and so on is not for us.

“We played Levante, a game where we fell further behind Barcelona. At that moment we stopped talking. We were alone in a room and he tells me to be more open and honest.

“I told him that I didn’t think it was right for a professional to catch another coach’s eye. Someone from the club’s press department grabbed us and said we should calm down and talk about it. We sat down again and said what we had to say face to face.

“There were two or three games [in 2012-13] where we didn’t play well. That was when the old resentment reappeared, when we fell behind on the table. Our relationship has deteriorated. By the third year it had reached the point of no return.

Even so, Casillas said Mourinho was quick to get in touch with his best wishes when the goalkeeper suffered a heart attack in 2019.

“He called me and wished me the best. Those are the little things I should focus on. Other people have made more of the hostility than we do.”