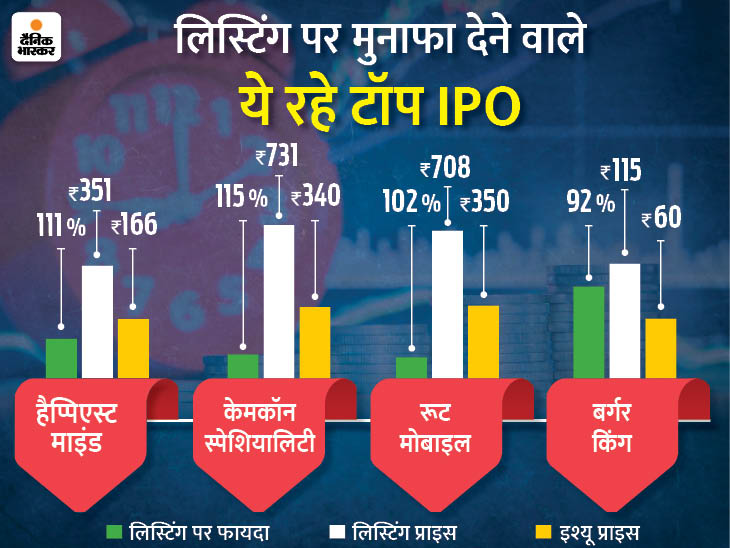 This year, Initial Initial Public Offers (IPOs) have been successful in benefiting investors. Burger King has also emerged as King. Its stock was listed at a 92% premium on Monday. That is, the investors who invested money in the IPO have gained 92% on the day of listing. This is the fourth IPO of this year which has given the most benefit.

Opened from 2 to 4 December

Let us know that Burger King’s IPO was open from 2 to 4 December. Its price was 58-60 rupees. It was listed on the Bombay Stock Exchange (BSE) at Rs 115 on Monday. That is, those who invested Rs 1,000 in the IPO became Rs 1,920. The craze of the IPO market in 2020 is tremendous. Investors have not only earned money from IPO, they have also earned good money from secondary market. The secondary market has gained nearly 78% since March. However, compared to January, it has got more than 10% return.

There are 3 IPOs before Burger King, which are listed at more than 100% premium. In the year 2020, 70% IPOs have been listed, which are listed at a premium. So far this year, 12 IPOs have come. In this, 8 have given good benefit to the investors. The IPO of 10 of these companies has come in September or after. Talking about this year, due to the lockdown, companies kept avoiding entering the market for a long time. But once the economy is back on track, companies are continuously bringing IPOs.

Gland Pharma has brought the largest pharma IPO in the country so far. It has raised Rs 6,400 crore. Apart from this, Rosari Biotech, Root Mobile, Happiest Minds, Chemcon Specialty, Angel Broking, Mazgaon Dock, Equitas Bank and Burger King. Talking about their performance, the value of the IPO of Chemcon Specialty was Rs 340. It was listed at Rs 731. Investors have gained 115% in this.

The IPO of Burger King was worth Rs 60. It was listed at Rs 115. That is, investors have gained 92%. Rosari Biotech’s IPO has given investors a 58% advantage. It came at Rs 425 and was listed at Rs 670 on the IPO exchange. Apart from this, the IPOs which have been listed have also given good benefits. However, this advantage has been less than 50%.

Mazgaon Dak’s IPO has given 49% benefit to investors. It was listed at Rs 216 and the IPO was priced at Rs 145. The IPO of CAMS working for mutual funds gave a profit of 25%. The IPO of Gland Pharma gave a 14% gain. Its IPO was valued at Rs 1,500. Some IPOs, however, had given losses to investors at this time.

These IPOs made losses

Financial servicing Equitas Holding had given a 6% loss to investors. It was listed at Rs 31 compared to Rs 33. Angel Broking has lost 10%. Its price was at Rs 306 which was listed at 275. UTI Asset Management Company had to struggle to fill the IPO too. It gave investors a loss of 12%. While the SBI Card IPO has given a loss of 13% to the investors.

By the way, you are getting a chance to earn an IPO again from Tuesday. The IPO of Mrs. Bacter, which supplies the material to Burger King, is opening from tomorrow. It is trading at a 70% premium in the gray market. That is, there is a huge demand among investors even before the IPO opens. In such a situation, its IPO will be good as well as it can give good profits on the listing. The company aims to raise Rs 540 crore. Many shareholders will sell their stake in it.

There is a discount of 15 rupees for the employees. 50 lakh shares are reserved for them. Investors can apply for at least 50 shares. Its price has been fixed from 286 to 288 rupees. Actually the value of this company was going to be low. But in the meantime, the way Burger King’s IPO received a response, the price of Mrs. Bacter was increased. Burger King’s IPO was 156 times full. In such a situation, the company supplying material to it is also going to be an IPO hit.

These IPOs are also in line