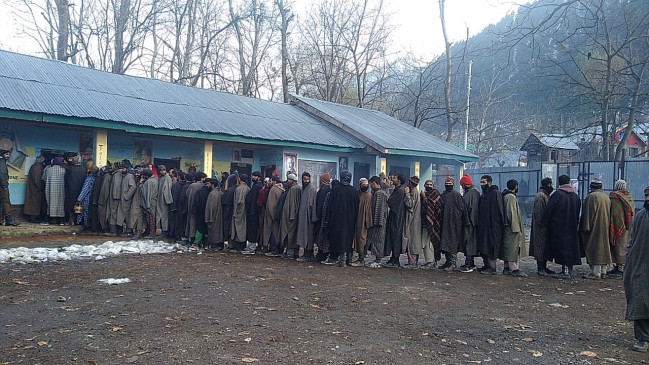 (Mohit Kandhari). Voting for the eight-phase civic election (DDC) was held in Jammu and Kashmir. More than 50% of the voting has blocked the timing of elections and the words of those who sing the voice of dissatisfaction among the people. Despite the restrictions imposed due to bad weather and corona epidemic, people from 20 districts of Jammu and Kashmir came out in large numbers to vote. Border districts like Kupwara, Rajouri, Poonch, Samba and Kathua also witnessed heavy turnout. Hilly areas like Doda and Kishtwar have also witnessed impressive turnout.
Both BJP and group organization have put their full strength in these elections. The BJP made its strategy around the performance of Prime Minister Narendra Modi. At the same time, the group made the state’s status and the restoration of 370 its basis. The BJP engaged about a dozen national leaders in the election campaign. The party’s dominance in the Jammu region is expected to continue.

The Valmiki and Gorkha Samaj cast their vote here for the first time. Apart from this, the party engaged many local women leaders, including Smriti Irani, on campaigning to woo women. In some pockets of North Kashmir too, the BJP may surprise by performing well. On the other hand, the Gupakar coalition is expected to achieve strong figures in southern Kashmir. The election results will come on 22 December.