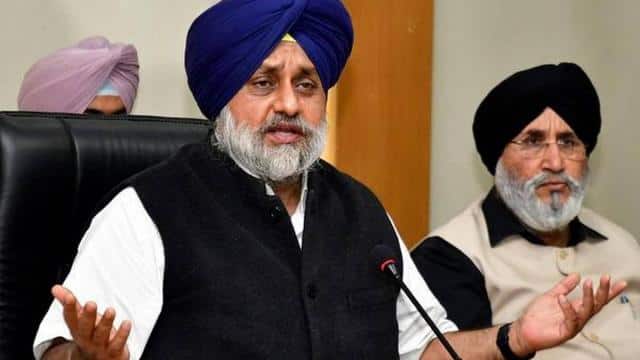 The Shiromani Akali Dal (SAD) chief Sukhbir Singh Badal, who recently quit the NDA government over new agricultural laws, has launched a scathing attack on the BJP on Tuesday. Badal accused the BJP of being a ‘real piece of gang’ and alleged that the party in Punjab was inciting Hindus against Sikhs.

Sukhbir Singh Badal asked his old colleague BJP to abandon his’ arrogant attitude ‘on agricultural laws and accept the farmers’ views. Badal said that the one who speaks in favor of the central government, she speaks ‘Desh Bhakta’ and the one who speaks against the government is called a ‘piece of gang’.

Akali Dal chief Badal tweeted, “BJP is the real ‘piecemeal gang’ of the country.” It broke the unity of the country into pieces. Brazenly incited Hindus against Muslims and is now pitting Hindus against Sikhs in Punjab. She is pushing patriotic Punjab towards communal fire. ”

The Shiromani Akali Dal had left the NDA a few months ago on the issue of new agricultural laws. Harsimrat Singh Badal, a SAD leader and a minister in the central government, also resigned from the cabinet. Harsimrat Kaur Badal was the sole representative of the Akali Dal in the Modi government and also the Akali Dal, the oldest ally of the BJP.

It is noteworthy that many farmers’ organizations have been protesting against the Central Agricultural Laws in many places near Delhi for the last about three weeks. They are demanding withdrawal of these laws. Several rounds of farmer organizations’ interactions with the government have been fruitless. The government had proposed several amendments to the agricultural laws, which the farmers refused to accept.