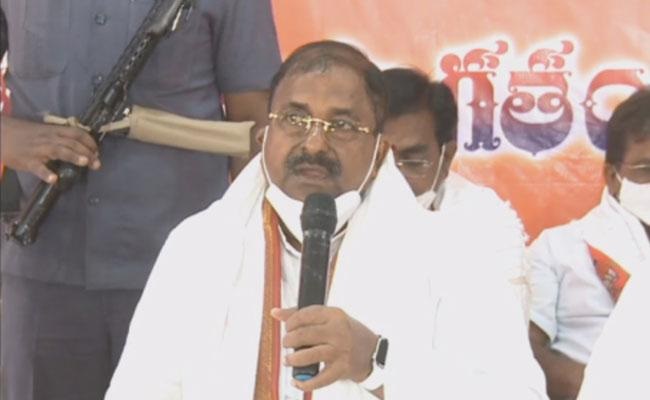 In Andhra Pradesh, the BJP is all set to come to power in 2024 along with the allied Janasena. As part of this, the party also handed over the responsibilities of supremacy to Somu Weeraraj as the state president. For any party to be strong, it has to behave differently than its rivals.

Why should people choose a third party if they behave like rival parties? Now these are the issues that are provoking the minds of the people of Andhra Pradesh in the case of BJP. In other words, there are growing views that the BJP is falling into the main opposition TDP trap.

An example of this is the announcement by party president Somu Veerraju that the BJP will fight for the capital if Amravati. TDP has been making the same demand year after year. The TDP, the main opposition party in the Amravati region, benefits. What is the benefit to the BJP if it fights for Amravati? Not to mention the loss over.

Somu Veerraju, who was the chief guest at the Kisan Sangh-sponsored farmers’ association in Tulluru, said the BJP was building a wonderful capital for AP people in Amravati. They are opposed to the three capitals. No second thought. Somu clarified that Amravati is the capital.

Veerraju said it was great that the BJP would not turn a blind eye to CM Jagan. He also announced that they would launch a movement to keep Amravati alone as the capital. He, however, demanded that the BJP be given power in the state in 2024. Amravati will be developed at a cost of Rs 5,000 crore. He said all facilities would be provided to farmers’ plots at a cost of Rs 2,000 crore.

Now let us talk about the damage that would be done to the party if the movement for Amravati to remain the same as the capital, as announced by Somu Veerraju, was launched. As the ruling party at the center, it will have to block three capitals. It was not done by the central government under any circumstances.

The central government has already filed an affidavit in the high court stating that the choice of capital is already the right of the states and there is nowhere in the law that there should be a single capital. Movement does not mean just saying the words and spending time in the pub. It’s hard work to move without words and deeds. Unnecessarily sacrificing the party to Amravati.

On the other hand, what is the answer to Rayalaseema and Uttaranchal? What is the response to the demand to set up a High Court in Kurnool? Does the BJP think that Andhra Pradesh is just 19 villages within the limits of Amravati? Somu Veerraju seems to have forgotten that he needs the blessings of Rayalaseema, Uttarandhra, East, West Godavari and other places to come to power.

Veerraju’s statement that BJP will not turn a blind eye like CM Jagan seems to be hurting Chandrababu. What is the guarantee given in the matter of special status? Also, what about the special funds to be given to the backward districts? Needless to say, there are many who prove that misrepresentation and reversal are education put with butter for the BJP.

Will this sega spread to the whole country?