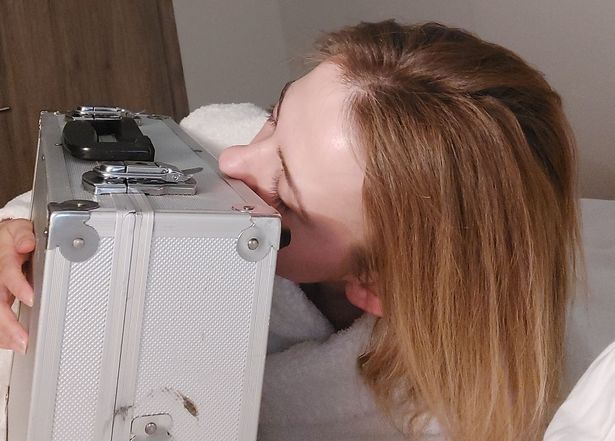 Needless to say, 2020 is a year of strange happenings and strange happenings. This list includes a 24-year-old Russian woman who has revealed that she “married” a briefcase and says her new “husband” is the love of her life. Her bizarre relationship with her briefcase named “Gideon” is an example of objectophilia that has a sexual or romantic attraction for an inanimate object. Read Also – German Woman Announces She Will Marry Airplane, Claims They Have Been Together For 6 Years

The Moscow-born woman named Rain Gordon said she had always been attracted to inanimate objects, and things eventually got romantic with a briefcase she now calls her “husband.” The 24-year-old married Briefcase this June, and a friend presided over the ceremony, LadBible reported.

It was in 2015 when Rain met Gideon at a hardware store and eventually fell in love. Rain said their relationship became official a few months later in November 2015 when they shared their first hug and kiss.

“Our spiritual connection and communication is shown telepathically. I hear him and he hears me, but from the outside it looks like a monologue. Gideon is more than a partner to me. He’s a husband, friend, and mentor. His moral support helps me more than anyone. Sometimes I feel like Gideon knows me better than I do. “

Of this strange relationship, she said: “My fascination with objects began at the age of eight. Since childhood, I have believed that a soul is embedded in objects and everything around us. I believe in animism, which means that there is life in everything. During my childhood and early teens, I fell in love with places like the new mall that opened in my city. I knew it was wrong and beyond the norms of society. I haven’t told anyone. “

In a similar case in January of this year a woman from Berlin married a jumbo airplane with which she had “arranged” for six years! The 30-year-old saleswoman said she had already “hit” the plane at Berlin Tegel Airport in March 2014 and claims that it was love at first sight. She even called the 737-800 “treasure”, which translates as “darling”.