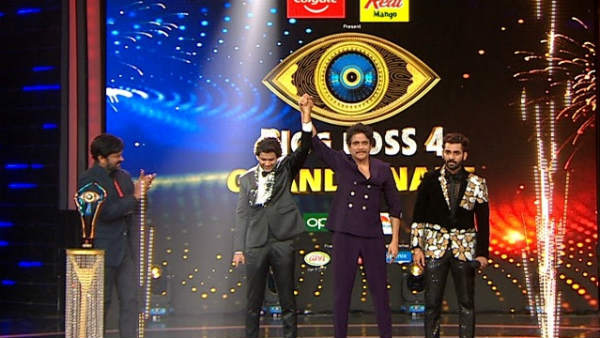 Akhil, who is in the top 2, went inside the house of Nagarjuna Bigg Boss to fetch Abhijit. Nagarjuna grabbed the two hands and held them out, scattering the lights very grandly. If they do .. while the lights are on .. Bigg Boss says goodbye to the house.

Chiranjeevi was the chief guest to announce the Bigg Boss winner. Abhijit talked a little about Akhil. Life is Beautiful looks very mature in the movie .. I thought it was a character but the original as well as very matured, said Chiru. Akhil talks about sharing all the emotions like friendship and love.

Chiru talked to all the members of the house and showered some of them for weeks. Sohail said he would promote the upcoming film. He gave the home-cooked mutton to Sohel. Divi Vedalam made an offer in the remake. Mehboob gave a check of ten lakhs of yours on stage.

On the small hands ..

Akhil Abhijit announced Nagarjuna as the winner of the two. Abhijit received the trophy over Chiru’s hands. Receiving the trophy, Abhijit became emotional. Abhijit stood on his knees emotionally as if to salute the audience who cast their votes. He became so emotional that he didn’t even know how to say thank you to the audience.