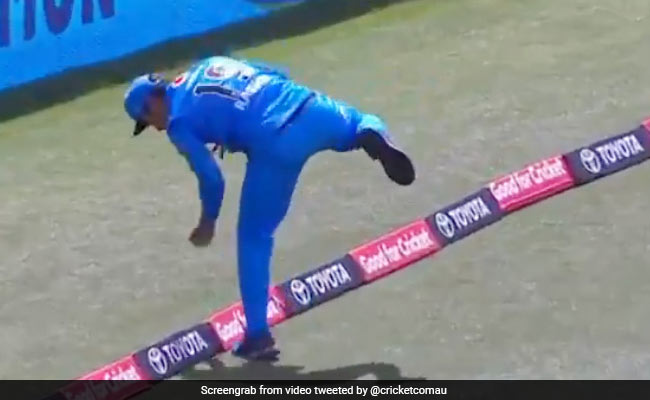 Rashid Khan caught an amazing catch on the boundary, jumped and caught such a ball – see video

Big Bash League 2020: The Big Bash League (BBL) is played between the Hobard Hurricanes and the Adelaide Strikers (Hobart Hurricanes Vs Adelaide Strikers). Hobard won the match easily by 11 runs thanks to a banging innings of D’Arcy Short. Adelaide may have lost, but Rashid Khan, playing on their behalf, performed brilliantly. Along with taking a wicket, he also caught brilliant catches. He jumped on the boundary and caught the catch of Colin Ingram. Video is becoming viral on social media very fast.

Hobard had scored 137 runs in 15 overs after losing 2 wickets. The captain handed the ball to Peter Siddle for the wicket. On the ball of Siddle, Colin Ingram shot for a six. Rashid Khan was fielding on the boundary. Rashid Khan caught the catch, but he was going beyond the boundary. He tossed the ball and caught it again after returning to the ground.

So good to have Rashid Khan back in Australia – because he does things like this! @BKTtires | # BBL10pic.twitter.com/8qkofnlYop

The Adelaide Strikers won the toss and decided to field first, but their decision was not proved right. Darkie Short and Will Jacques added 63 runs together. Then along with Short, Colin Ingram handled the innings.

Hobard scored 174 runs in 20 overs. In response, Adelaide could only manage 163 runs. James Faulkner took 3 wickets, while Johan Botha and Riley Meredith got 2–2 wickets. Only Daniel Worrall was able to score 62 runs, apart from him no batsman could run.