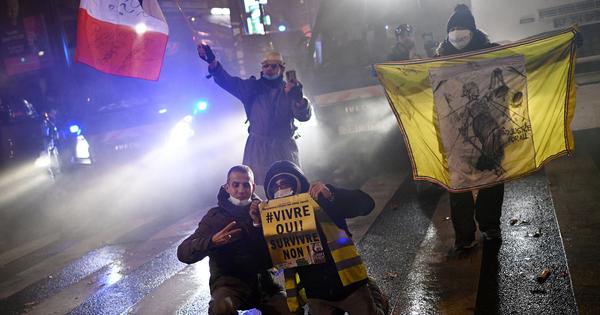 Two years ago, the streets of France were filled with Gilets Jauns (yellow vests), a grassroots protest movement sparked by a planned increase in gasoline taxes.

Despite shedding their yellow safety jackets, many of these disaffected people have joined a new wave of protests that has upset France for weeks and poses a major challenge to President Emmanuel Macron’s government.

The protests broke out in late October after the horrific murder of the school teacher Samuel Paty, who used caricatures of the Prophet Muhammad during a class. Thousands marched in honor of Paty, but also in support of freedom of expression.

The roots of Macron’s current challenge

An explanation of the tensions that bind these protests takes us deep into the history of France as well as into the current crises. It also suggests that there is no easy solution.

In 1789 French revolutionaries tried to record their two aspirations for religious tolerance and freedom of speech in Articles 10 and 11 of the Declaration of the Rights of Man and Citizen.

“Nobody should be harassed because of their opinion, not even because of religious ones,” they emphasized, while claiming that “the free communication of thoughts and opinions is one of the most valuable human rights”.

Should these natural rights be restricted in any way? Yes, of course: as stated in Article 4, they would limit themselves to “granting other members of society the same rights”. How this can be achieved “only the law can set these limits”.

That was the problem. Since “the law” would be enacted by national legislators, these limits would always prevail – that is, by elected politicians working in a social and political context. That’s Macron’s nasty problem today.

The ongoing debate about laïcité

Immediately after 1789, there were conflicts between the revolutionaries and their opponents over the limits of freedom. There were violent, even pornographic, attacks on Marie-Antoinette and the Catholic Church, reflecting a deadly schism between secular, republican France and the Church.

For the Republicans, the principle of laïcité, that is, a secular public space, was a central legacy of the revolution.

Freedom of religion is guaranteed in France as long as it does not disturb public order. Religion is seen as a private matter and its observance is strictly separated from public life.

This is a deeply rooted belief in France. It declares the 2010 law prohibiting the wearing of full face coverings in public, including but not limited to burqas and niqābs.

French supporters of laïcité would find it confusing, if not offensive, for an Australian Prime Minister, Kevin Rudd, to hold Sunday press conferences outside his church, or another, Scott Morrison, to greet the media in his church and describe worldly events (such as an election victory) as a “miracle”. In France this could end his political career.

Australian and US commentators have been too ready to criticize France for not accepting differences as much as their own societies and ignoring France’s diverse past and present.

From 1789 Jews, Protestants, Muslims – as well as Catholics – were guaranteed religious freedom, but the fine line between religious freedoms and secular public space was always blurred, sometimes with tragic consequences.

Take the false conviction of Captain Alfred Dreyfus for high treason in 1894, followed by his imprisonment and eventual exoneration in 1906. This was deeply polarizing as it was at a time when the violent divisions in France over the place of Jews in public life were acute Embodied anti-Semitism.

Dreyfus’ anti-Semitic and anti-republican accusers included many clergymen – one of the reasons for the formal separation of church and state in 1905.

Similarly, the beheading of Paty and a subsequent terrorist attack in Nice in late October sparked a profound reaction as it occurred amid deep national tensions over the location of Muslims in France.

These tensions date back to wars of decolonization in the 1960s, but were compounded by the recent attacks on satirical magazine Charlie Hebdo and the Bataclan Theater in 2015.

While almost all Muslim organizations in France swiftly and unequivocally rejected these murders, some elsewhere in the Muslim world were against the freedoms given to media such as Charlie Hebdo to publish cartoons that mock Islam and its prophet.

Leaders in Turkey, Morocco, Pakistan, Egypt and elsewhere condemned the magazine and called for consumer boycotts of French products.

Charlie Hebdo’s defense was her to mock everyone, and what followed was an obscene caricature of Turkish President Recep Tayyip Erdogan.

Macron has insisted that respect for all religions must be balanced with freedom of expression, no matter how offensive some caricatures may be to people of faith.

He defended Charlie Hebdo’s right to publish the cartoons, although some may be banned in other countries as being intentionally offensive or even racially banned. While France has anti-hate laws, its highest courts have also been very reluctant to punish satire.

At the same time, Macron’s Minister for National Education, Jean-Michel Blanquer, has targeted “Islamo-Gauchism” which allegedly undermines the values ​​of French Republicans through left-wing academics and intellectuals who feel guilty about France’s colonial past.

Can Macron find a solution?

These tensions have now spread to the streets in unexpected ways as they are mired in deep fears and divisions over decolonization, policing and the limits of secularism. All of this comes at a time of economic desperation and severe criticism of the government’s abusive treatment of the pandemic.

In this context, violent police raids and a comprehensive national security law that would constitute a criminal offense to publish photos or films to identify police officers and to expand police surveillance powers have sparked widespread dissatisfaction.

In early December, the Macron government announced a revision of the security law. This alone will not slow down a deep crisis of confidence in the fundamental values ​​of the republic: secularism, freedom of speech and respect for religious plurality.

In such a situation, the siren calls of cultural stereotyping may get louder and Macron may need a “miracle” of his own to keep France out of the hands of Marine Le Pen and her Rassemblement National (National Rally), formerly known as the Front National in the presidential election in April 2022.

Peter McPhee is Professor Emeritus at the University of Melbourne.

This article first appeared on The Conversation.