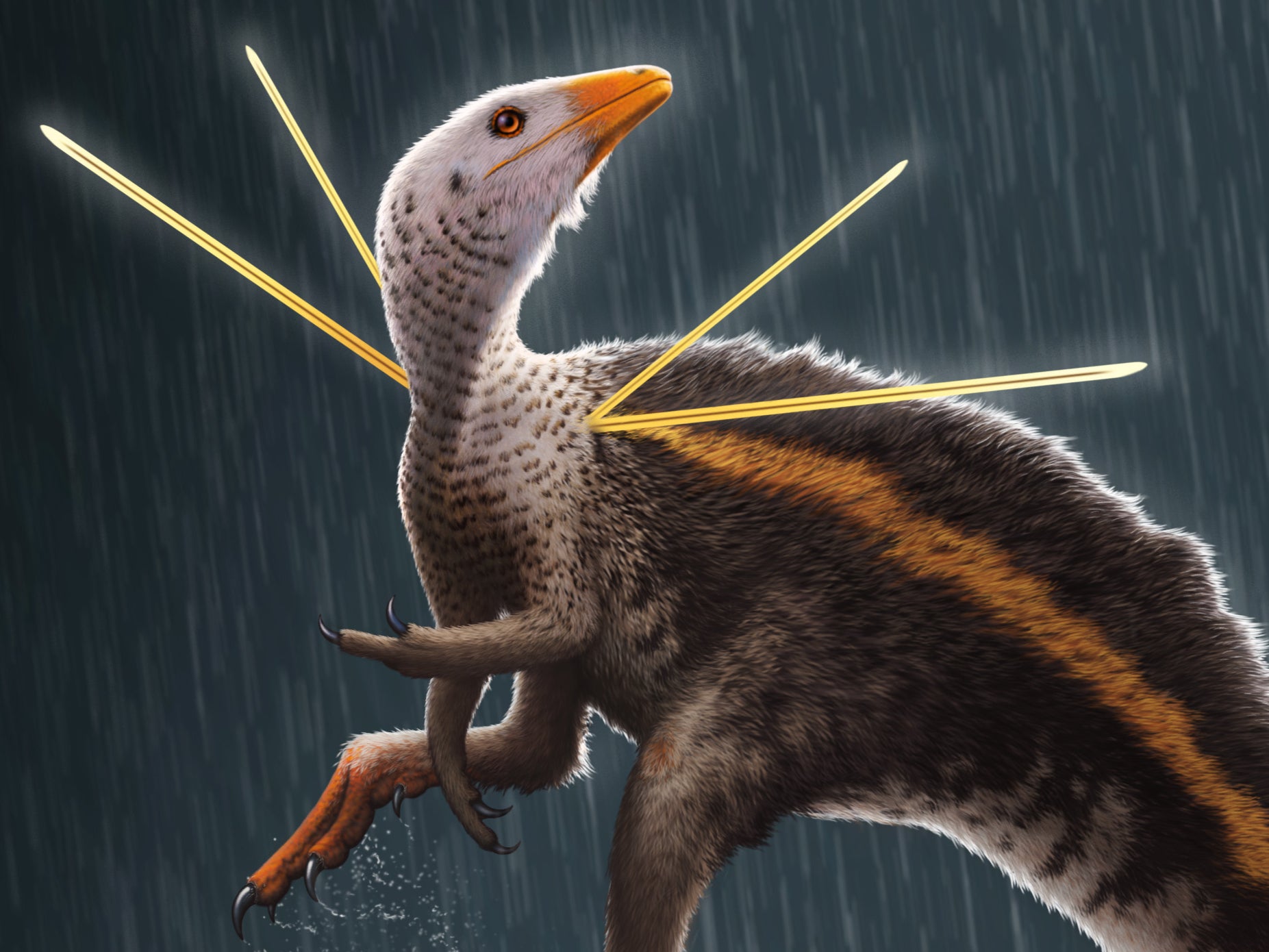 A new chicken-sized dinosaur has been discovered with extravagant features that are used to attract partners or intimidate enemies.

Ubirajara jubatus, who lived about 110 million years ago, had elaborate plumage with a long fur mane and stiff ribbons protruding from its shoulders.

Researchers said these shoulder straps were not scales, furs, or feathers and are believed to be unique to the animal. Each had a small sharp ridge in the middle.

Scientists excavated the sample from two stone slabs and, using X-rays, found previously hidden skeletal elements and soft tissue – including part of the long, thick mane that ran down the animal’s back and remained virtually intact. The arms were covered with fur-like filaments up to the hands.

The dinosaur was discovered by an international team of scientists led by Professor David Martill and the researcher Robert Smyth at the University of Portsmouth and Professor Dino Frey from the State Natural History Museum in Karlsruhe, who examined the fossils stored in the museum.

Their research showed that the mane is controlled by muscles so it can be lifted up, much like a porcupine lifts its quills when it feels threatened.

Professor Martill said: “What is particularly unusual about the animal is the presence of two very long, probably stiff, ligaments on either side of its shoulders, which are likely used for indicating, attracting partners, rivalry between men, or deterring enemies were.

“We cannot prove that the specimen is a male, but given the differences between male and female birds, it seems likely that the specimen was male and also young, which is surprising since the most complex representation skills are reserved for mature adult males.

“In view of its extravagance, we can imagine that the dinosaur indulged in an elaborate dance to demonstrate its exhibition structures.”

Mr Smyth said the dinosaur’s plumage may have improved its chances of survival.

He said, “We know that many dinosaurs had bony crests, spines and ruffles that were likely to be displayed, but we don’t see these very often in live birds. In birds, the combs are made of feathers.

This little dinosaur gives an insight into why this might be the case.

“Bones require a lot of energy for a body to grow and maintain. It is also heavy and can cause serious injury if broken.

“Keratin – the material that makes hair, feathers, and scales – is a much better display alternative for a small animal like this one. The production of keratin is cheaper for a body, it is also light, flexible and can be replaced regularly if damaged.

“Ubirajara is the most primitive known dinosaur that has integer representation structures. It is a revolution in dinosaur communication, the effects of which we can still see in living birds today. “

Ubirajara jubatus is closely related to the European Jurassic dinosaur Compsognathus – one of the smallest known dinosaurs that was a fast runner with a long neck and tail, strong hind legs, and small front legs.

The study will be published in the journal Chalk research.