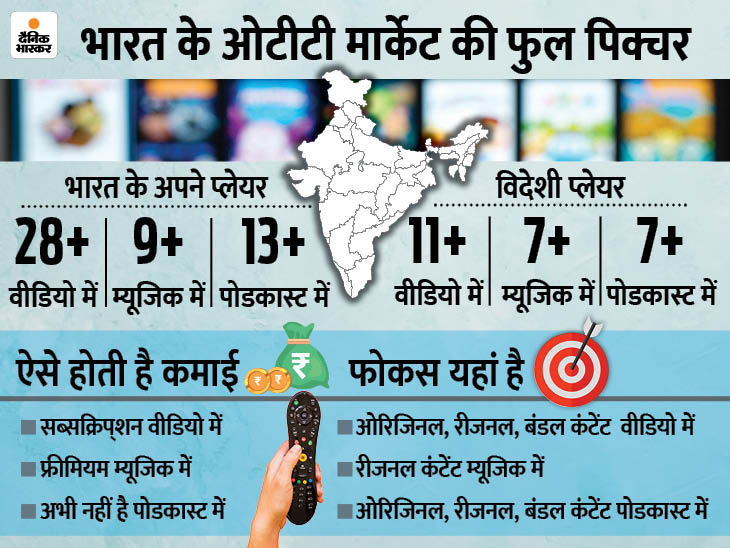 Dipali Porwal is a resident of Kanpur. She says when I have free time, I watch my TV serials. Sometimes in an auto rickshaw or sometimes at the dining table. It has happened many times that TV has been playing in front of me and I start watching the story ahead on mobile, because the next day’s episode also comes on mobile.

Rohit Mishra is a resident of Rae Bareli. It is said that he has not recharged his TV for six months. He is now watching Bihar elections, IPL, India Australia cricket series on laptop and mobile. They watch most of the newly released movies in theaters on Fridays. He likes to write and talk on films. So, he will still go to theaters for films. But there is a condition, if the films are released simultaneously at theaters and OTT (Over the Top) then they will go to theaters for a few films.

Both these things are from December 2020. A similar thing happened on OTT in February 2020. I wrote OTT in one of my news headlines. On this, one of my colleagues got angry, said- people do not understand OTT, what is this? I said, over the top, digital platforms. She started saying, everyone does a bit of journalism like you. I said, do you watch Big Boss, KBC on mobile? Speak – Yes. Asked how? Bolin- App is in my mobile. I said – this is OTT.

Recently, he was talked about again on OTT. Bolin – drive the car, burn petrol, parking money, 300 tickets, popcorn, 1500 was spent on a movie. So, how many Bollywood-Hollywood movies should I watch on OTT? They too sit in the quilt and sip their tea.

I stayed, I started walking …
Deepali Porwal, Rohit Mishra and fellow women journalists have not stopped watching TV, cinema, have changed the habit. Now, what is happening in this habit. Let us examine it with caution …

Apart from Hindi, more than 95 OTT platforms with video streaming, music, podcasts have been launched in other regional languages ​​including Marathi, Tamil, Telugu, Bengali, Punjabi. Even ‘Hulu’ has not yet arrived in India. But the viewers of India are watching it with the theft of DNS, VPN jugaad.

TV and film trade analyst Salil Kumar Egg says that the TRP of TV has been completely destroyed. Amitabh Bachchan-Ayushman Khurana, Alia Bhatt, Akshay Kumar, Varun Dhawan are bringing their films to OTT. That is, everyone has understood the future. Now OTT is the only choice.

What a joy we have, to set my heart on you…
In a report by KPMG, it was estimated that by 2023 the subscribers of video on OTT in India will be more than 500 million. Senior film journalist Ajay Brahmatmaj says that there are so many cinemas in India that a film like Bahubali was seen by only 5 crore people.

Trade analyst says, till now out of 100 rupees coming for publicity, 60 rupees were used for TV, 30 rupees digital and 10 rupees. But this figure is going to reverse in the next three years. 60 percent of the money will come for publicity on digital ie OTT. Big stars will go on OTT to promote their films.

After 3 years OTT’s market will be around 12 thousand crores
The PWC report states that the OTT market in India was only 4,464 crore in 2018. 11,976 crores in 2023. It simply means that the producers either have to understand the demand for OTT or they will start getting out of the industry. Salil Kumar And directly says that in the coming days many cinema and TV shopkeepers are going to be closed.

On the other hand, the way the TRPs of KBC and Bigg Boss have consistently come down, TV producers will not be able to drag them for long. It may also be that the loss from the show can be compensated by removing Salman Khan and Amitabh Bachchan. The simple reason behind this is people moving towards OTT.

Ajay Brahmatmaj believes that people had already started watching cinema on mobile. There were reports of movies leaking on the next day. Theaters were already closing. When I lived in Patna, there used to be more than 20 cinemas. Now some four to five are left. In the past, there are reports of rapid closure of single screen cinemas in Hyderabad and many places. More than 1000 cinemas are expected to be closed in the coming two years.

You have stolen the heart, do not steal my eyes …
Surveys and trade analysts from many companies with market research are praising OTT. But senior journalist Dinesh Srinet says, “OTT has put all its strength to reach as many people as possible.” Plenty of experiments are being done. But remembering content is not yet being created. Senior film journalist Anupama Chopra says that due to OTT, the cinema that is going to be lost in the minds of people is being lost. People are watching movies in pieces by their own convenience.

Actor Amol Parashar, who was discussed from the OTT platform, says that no one can be forced to show anything here. People will see the whole only when the content is strong. Otherwise Audius will move in half by closing.

In such a situation, the biggest challenge of OTT is that cinematographers serve a variety of dishes in the plate and focus on the best taste. However, there are three special types of content on OTT right now. First, pre-made TV shows, web shows, films worldwide. These are dubbed and shown in different languages. Second, Originals, new films and new shows are being made in it. Third, music and podcasts.

Money show
The main source of revenue of the OTT platform is subscription money. Apart from this, money is earned by showing advertisements in between videos. More than one person uses it at different times after taking a subscription. There are many subscription plans that people take along with friends. OTT buys space on the server for the money it receives from people. Apart from this, he buys money from whom he buys content. In between there were reports that Ranveer Singh and Deepika Padukone were willing to pay OTT 100 crores to buy the starrer film 83.

THERE Corona is positive for
Eros Now CEO Ali Hussain says that we had not anticipated the sudden arrival of so many users. The increase we had expected by the last months of 2022, the same number of people arrived before the end of 2020. We expect this to increase further.

The lockdown has gone wildly, the salary has been cut. Those people who used to go to the cinema to eliminate tiredness from work for five-six days, their number will be reduced. The OTT has pushed DTH to the brink of a near end. In such a situation, OTT is going to be the most powerful player in the entertainment world.